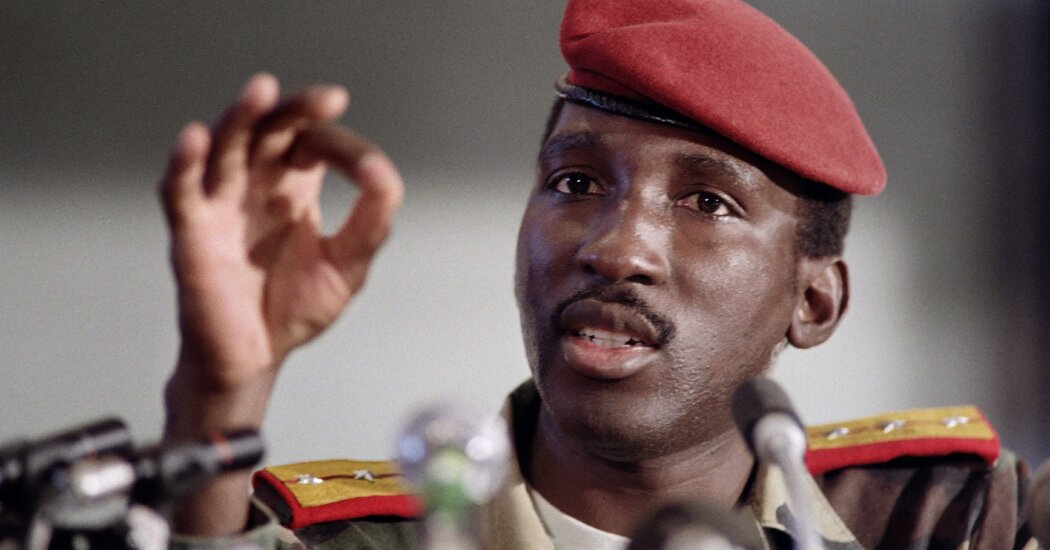 Who killed Thomas Sankara? Opening of the trial, 34 years after his death.

DAKAR, Senegal – One of the most anticipated trials ever held in Africa opened Monday in the capital of Burkina Faso, aimed at establishing who killed Thomas Sankara, the country’s former president and a renowned revolutionary leader in across the continent.

Mr. Sankara was assassinated 34 years ago, along with 12 others, by a commando in the capital, Ouagadougou, after only four years in power.

Now, 14 men accused of plotting his death are on trial in the capital. Among them is a man once known as his close friend, Blaise CompaorÃ©, who succeeded Mr Sankara as president – and remained in power for 27 years. Mr. CompaorÃ© is tried in absentia; attempts by the government of Burkina Faso to extradite him from CÃ´te d’Ivoire, where he lives in exile, have been unsuccessful.

Most of the defendants arrived in court on Monday in a white bus. Besides Mr. CompaorÃ©, the man suspected of having led the team that killed Mr. Sankara, Hyacinthe Kafando, was also absent, his whereabouts unknown.

“We were waiting for this moment,” said Mariam Sankara, the widow of Mr. Sankara, who arrived at the trial on Monday from her home in the south of France. She had insisted for years on bringing her killers to justice.

Mr. Sankara was president of Burkina Faso, a landlocked and diverse country in West Africa, from 1983, when he took power in a coup, to 1987. He was 37 years old. when he was killed and was already revered in many African countries for speaking out. against the vestiges of colonialism and the impact of Western financial institutions like the World Bank and the International Monetary Fund.

“The main objective of the revolution,” Sankara said shortly after taking power, “is to destroy imperialist domination and exploitation.”

He renamed the country, changing it from Upper Volta, as labeled by France, to Burkina Faso, which means “the land of the upright” in Moore, the language of the largest ethnic group in the country.

The trial, which is expected to last several months, is a military tribunal presided over by both civilian and military officials.

The most anticipated testimony could be that of Gilbert DiendÃ©rÃ©, who was the only accused to attend the trial in military uniform. Former general and right-hand man of Mr. CompaorÃ©, he is accused of endangering state security, complicity in murder, concealment of corpses and corruption of witnesses.

At the time of Mr. Sankara’s death, Mr. CompaorÃ© was serving as Minister of State in the Presidency. Mr. CompaorÃ© then said that his commandos had heard that Mr. Sankara was planning to have him killed. The commandos immediately went to the presidential palace, Mr. CompaorÃ© said, where without asking him beforehand, they killed Mr. Sankara and 12 of his collaborators.

Mr. CompaorÃ© said at the time that his men intended to arrest Mr. Sankara, but â€œHe responded by shooting. “

Mr. CompaorÃ© had his old friend buried in the grave of a commoner.

During his tenure, Mr. CompaorÃ© was known as a pillar of â€œFranÃ§afriqueâ€, an arrangement where even after the official end of colonialism, France continued to pull the political strings of its former African colonies.

For years there have been allegations that France was involved in the assassination. French President Emmanuel Macron said in 2017 that he would lift the secret classification of all documents relating to the Sankara affair, and so far three bundles of documents have been sent to Burkina Faso. But none came from the office of FranÃ§ois Mitterrand, the French president at the time.

After 27 years in power, Mr. CompaorÃ© attempted to amend the Constitution to allow him to extend his reign even further. But the country erupted into protest and he was forced to resign in 2014 and then leave Burkina Faso.

After a year of political unrest, the current president, Roch Marc Christian KaborÃ©, was elected in 2015. He was re-elected in 2020. He had a statue of Mr. Sankara erected, and a mausoleum, a cinema and a media library in his honor are in the works.

But under Mr. KaborÃ©’s watch, life has become increasingly desperate for millions of people in Burkina Faso. Violence caused by bandits, vigilantes and terrorists who claim to be affiliated with Al Qaeda or the Islamic State – and military abuses – have left thousands dead and more than a million displaced. A country that prided itself on tolerance and cooperation has become increasingly polarized.