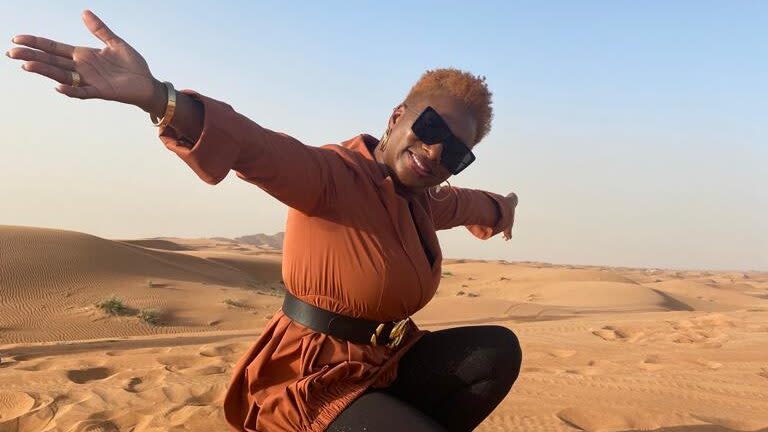 Afrozons Dubai Soundoff is a premier travel experience organized by the Dubai Tourism Board in partnership with Afrozons Radio and host Sheila O. to promote bringing together the black diaspora in Dubai. But this one-of-a-kind trip is not limited to people living in the United Arab Emirates. Afrozons Dubai Soundoff aims to encourage the amalgamation of black nations and people of black descent from around the world.

When you think of Dubai, you might think of skyscrapers, modern architecture, and the most luxurious city and nightlife scenes. But if there’s one thing you can’t directly correlate to the shining emirate, it’s a festival solely dedicated to uniting the black diaspora. This is where the Afrozons come in.

At this festival, you can expect to take part in a variety of activities including a welcome reception, an Afrobeat concert, camel rides in the dunes, game drives, dinners, parties and panels featuring celebrities from 14 countries, including the United States. , Ghana, Kenya, UK, etc. The festival’s mission is to fully usher in Dubai as a destination of choice for the black diaspora.

Sheila O., whose full name is Sheila Okonji-Ashinze, is a well-known music and entertainment personality and mogul who made history in 2017 as the first international female media personality to come up with a talk show. Afrobeat radio, Afrozons, to major US radio stations. . For the past five years, Afrozons Radio has broadened the American musical ear with the delicious sounds of Afrobeat on Power 92.3 in Chicago, and is also syndicated to channel 141, SiriusXM HURVoices. The two-hour show demonstrates the diversity of black diaspora music, playing hip-hop, urban and R&B, but as its title suggests, Afrozons’ main focus has been to mainstream Afrobeat in America, which he has successfully achieved since 2017.

Afrozons Dubai Soundoff was dreamed up by Sheila O., who rallied the support of Dubai’s Department of Economy and Tourism. Together they managed to bring over 500 people to Dubai in March 2022 to experience black culture in a new city. Celebrities and radio personalities like Big Tigger, Loni Love and Dj Bay Bay joined the event while several personalities from the UK and Africa including Angola, Tanzania, Zambia and Nigeria, also had fun.

Sam Selolwane of RCA Records credited Afrozons with raising awareness of Afrobeats in the United States, telling Black Enterprise that “Afrozons have been ahead of the curve in bringing Afrobeats to this side of the world for quite some time.

“Sheila’s dedication to artists and the genre helped catapult these artists into the household names we know today,” she added.

Having seen her vision come to fruition, Sheila O. described working with the Dubai Tourism Board to bring black travelers to Dubai as a fantasy. “I am a girl born in Lagos, Nigeria. I grew up in London. Yes, I live in Chicago, but Dubai is a dream come true,” she said.

Based on the success of the event, Dubai plans to welcome black travelers to the city of gold each year through Afrozons Dubai Soundoff, with a raffle to win a company trip set to begin around the fourth quarter of the year. Issam Kazim, Marketing CEO of the Dubai Corporation for Tourism and Commerce, told Black Enterprise. “It’s a proud moment to have Afrozons here in Dubai, celebrating here with us in a city that [has] more than 200 different nationalities who call Dubai home.

What to watch this weekend: ‘The First Lady’ premieres on Showtime