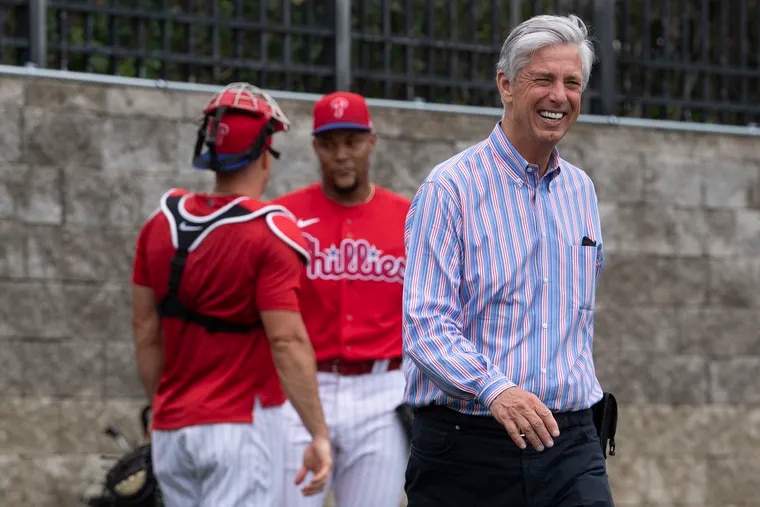 Before, we knew the people leading our teams better, but trust and access have diminished. The men and women behind the moves – people like Phillies legend Paul Owens, 76ers personality Pat Williams or Harry Gamble, who have touched every corner of football in the region, including the Eagles – have become dehumanized.

In an effort to humanize Philadelphia’s most polarizing men, we asked the same four questions of the people who run the Phillies, Sixers, Eagles and Flyers. None of the questions are about their teams, leagues, or careers; rather, we wanted a glimpse of their personalities.

How he is drawn to sports in academia, craves international travel, wants to soak the tongue, and would happily rule the free world, if only he had done the internship.

READ MORE: ‘Now we know we can do it’: What the end of their playoff drought means for the Phillies

What would your career be if you weren’t leading a professional sports team? An engineer? A truck driver? God forbid, a sports journalist?

My talents are quite limited. One thing that has always intrigued me is being a sports director at a university. I’ve been intrigued by the college scene all my life. And I’m only talking about my own experience of going to college [at Cornell and Western Michigan]. There’s something about being on a college campus. My wife is very involved in the University of Oklahoma [Karie Ross, a former sportscaster, is an Oklahoma native and alum]. I got to know their sporting director, Joe Castiglione, very well. Go to football matches – my daughter [Darbi] went to school there. Return to West Michigan, see football and basketball games. My son [Landon] in Wake Forest.

Often when I’m on the road, I jog. I jog for an hour about four days a week. If I’m close to a college campus, I love walking through a college campus, just the atmosphere there. I would say that being a sports director in a big university is something that would interest me.

You must dissociate yourself from your job for one calendar year, but you are completely anonymous. How would you spend this year? As a campaign volunteer? In Florence, immersed in culture? Learning stand-up comedy?

For me, it’s pretty straightforward on this one. I would like to travel more. I traveled across the United States, everywhere, of course, with my job. With my family, we travel during vacation time. We’ve always done that for years, in the Caribbean. But one of the things that I haven’t had a chance to do, basically because of the schedule I work in the summer, and it’s so busy in the winter, the ability to get away and seeing different cultures, and engaging with them, I just find fascinating.

A few years ago we went on safari in Africa. I loved being part of this culture. I’ve been really fascinated by wildlife for years, so to be involved in seeing this – if I could walk there, I’d be involved in conserving animal habitats. When I was with the Tigers, they asked us to get involved in danger to tigersso my wife is on a board for that.

I haven’t been to Europe much. I was in Paris, which I loved. We loved taking these tours, going through all the historical aspects of them. I went to London, but it was only for a few days [in 2019]when we played the games there with the Yankees and the Red Sox. I would like to travel, really, all over the world. To be immersed in different cultures and have the chance to discover them. It’s an easy question for me.

READ MORE: Brilliant Aaron Nola won the playoffs. He and Zack Wheeler are the reason the Phillies can win.

You have all been athletic. What career as an athlete, whatever the sport, would you like to experience? Bill Russell? Baby Ruth? Udonis Haslem?

I would have loved to live the life of Michael Jordan. It’s easy too. He is without doubt, for me, the greatest basketball player in history. He was a champion through and through. Won six world championships and was the most talented of the group. His abilities were amazing.

You are lucky enough to be President of the United States for two terms. Do you take it? Why or why not?

For me, it’s a “why not”, but with certain conditions.

I am not able to do this job. I just don’t have the political knowledge of the world or the United States. If you want to hold this position, you must be a leader capable of leading the whole country. I wouldn’t have the skills or the knowledge to do it.

Now, if you were to say to me, ‘OK, you’ve been in this business your whole life. You understand politics, and not just in the United States. You understand the problems of the world and the economy. So I would say, well, yeah. If I had that kind of knowledge, I would be interested.

The skills you need to lead in one area – for example, if it’s baseball, like I’m involved in – you could lead in other areas of life, if you had the knowledge in those areas. But I don’t have the experience to lead in this area.