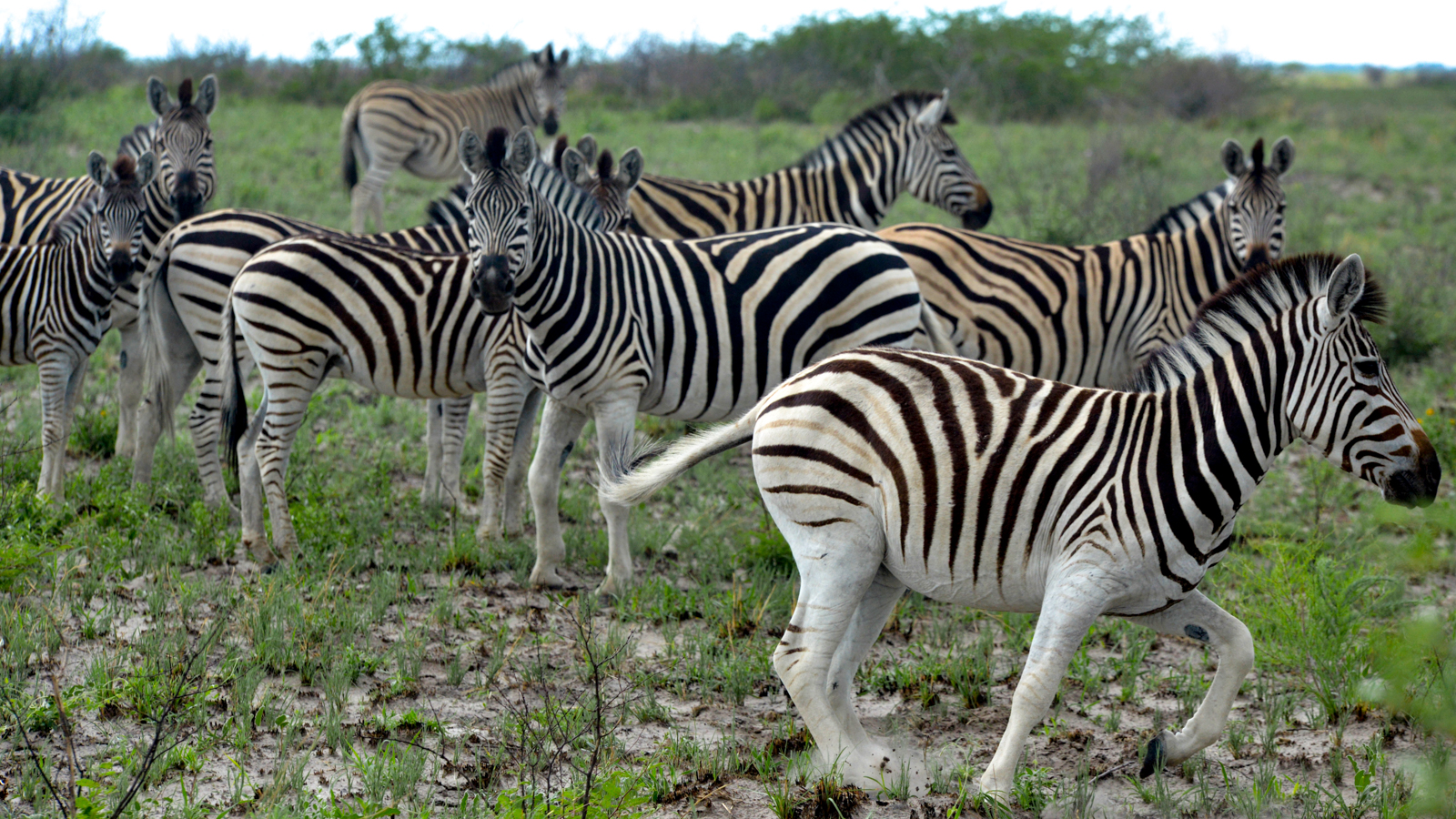 (CNN) – The helicopter rose smoothly from Maun Airport and we raced down the Thamalakane River. I knew it was a “river” only because I could see a bridge – nothing in the sandy dust ribbon suggested it had ever been touched by water.

It was hard to imagine that just 30 kilometers (18.6 miles) away, the world’s largest inland delta stretched north, stretching beyond the Namibian border of the Caprivi Strip. .

This is Nxai Pan National Park in Botswana, which is part of the largest expanse of salt marshes on our planet. It’s a remote region where the 600 square kilometers of the Okavango Delta finally seep into the insatiable sands of the Kalahari Desert, which early travelers aptly call “the great thirsty land.”

It’s so remote that the thing I was here to see, the world’s longest annual mammal migration on land, which sees 20,000 zebras crossing these pans, wasn’t even documented a decade ago.

I had explored the Kalahari twice in the past in a Land Rover and had also traveled to the Okavango several times. I had sat around Kalahari campfires under a dome of stars that seemed to rest directly on the horizon and drove among the lions in the Valley of Deception, where the mirages are so realistic you says they lure migrating pelicans to their death.

I had always been amazed by Botswana’s stunning geographic contrast between desert and delta, but the diversity was often difficult to appreciate because (apart from the relatively low hills of Tsodilo) the country is almost entirely flat. But the helicopter flight – a few hundred meters above the ground – offered a privileged view of the desert landscape.

“Looks rather dry and dusty from here, doesn’t it?” the pilot’s voice crackled in my headphones. “You’d be surprised how green it can turn with even the shortest splash of rain.”

Joe Healy was a far cry from the marshy greenery of his native Ireland, but after 2,000 hours of flying, Botswana held few secrets for him. He had clearly honed a trained eye for aerial safaris too. Suddenly he shoved the joystick to the right and we nodded sharply: “Here come the skyscrapers of Botswana!”

A herd of giraffes cast lanky shadows on the thorn bushes as they browsed among a stand of acacia trees.

“Have you seen any large herds of zebras lately? I asked.

Few safari enthusiasts tend to regard the humble zebra as a prime wildlife sighting. Healy was well aware that like most visitors to Nxai Pan at this time of year, I was hoping to witness one of the most amazing wildlife shows on the African continent.

With the onset of the rains, an estimated 20,000 Burchell’s zebra (Equus quagga) are believed to converge on Nxai Pans in what has only recently been recognized as the longest mammalian migration in Africa.

But – even from his high vantage point – Healy had yet to see the first clouds of dust that would herald the trampling of 80,000 hooves.

Ahead of us, we could see the bone-white reflection of the salt pans of Nxai Pan National Park. It wasn’t until 2012 that amazed park researchers realized that some zebras traveled more than 1,000 kilometers (620 miles) on their three-month return journey. This was significantly further than the migration of wildebeest and zebra on their well-known seasonal journey through the Serengeti ecosystem.

“The distance the zebra traveled was a complete shock to all of us,” Robin Naidoo, senior conservation scientist at the World Wildlife Fund, said at the time. “No one knew something of this magnitude was happening.”

As Healy tossed the helicopter over the cracked land next to the boundary of Nxai Pan National Park, I noticed again that there was little greenery to attract grazing animals.

“It’s been a very long dry season,” African Bush Camps guide Kenneth Mungomba told us as we set off into the park in an open-top vehicle.

I realized that this had been a particularly difficult time for the elephants. We held our noses as we passed a pachyderm carcass, scattered jackals and a hopping hyena. We were more than a thousand kilometers from the ocean, but the giant carcass, lying downwind of a small sand dune, reminded me of a beached whale.

Mungomba worked much of the year at Linyanti Bush Camp on the banks of the Chobe River, but each year as the rain clouds begin to gather over the Kalahari, he (like Chobe’s zebras) makes its own journey south to the seasonal migration expedition camp. .

It is wild Africa at its most dramatic. There is a sense of real adventure in the camp, with just six guest tents shaded by thorny acacia trees.

Guests unaccustomed to “Hemingway” safaris are often surprised that tent living can be so luxurious, with plush beds, a desk and an armchair in each tent.

There are en-suite bathrooms with bucket showers (just ask the staff to bring water heated over open fires behind the kitchen tent). Also in true Hemingway style, we celebrated our arrival with gin and tonic aperitifs, listening to the cry of hyenas.

During a three-course meal in the dining tent Beks Ndlovu, founder of African bush camps, gave us clues about the details of the migration. “The zebras leave the Chobe floodplains in November or December with the first rains,” he explained.

“The river valley grows long grass but it is not nutritious. At the end of December, they cross the arid hinterland, finally arriving at Nxai Pan at the end of January. They tend to stay until March, often dropping their foals here, although it has been suggested that zebras have the ability to delay birth for a few weeks if conditions are not favourable.”

I was awakened during the night by a resounding roar. The sound of a lion, bearing through the flimsy walls of a tent, is something that must be heard once in a lifetime.

Our day began with coffee around the campfire at first light and by mid-morning the guide Mungomba was already leading us through a savannah landscape that seemed to be scoured with moisture.

The ostrich sprinted past the vehicle and a pair of springhares took off like miniature kangaroos, kicking up puffs of dust with each bound.

Some say “Nxai” was named after a trap used by the Bushmen (the region’s first human inhabitants) to catch springhare. Springbok and impala jumped stiff-legged, displaying their strength and liveliness for any predators that might be on the prowl.

As Mungomba unerringly followed a series of trails to a spot where a large male cheetah hungrily watched the elusive banquet, I remembered seeing a pack of wild dogs hunting impala in the same spot years before.

Meadows that had been lush and verdant on my previous visits were now a dusty yellow. The sides were so flat that I sometimes had the impression that Mungomba was steering a boat through an archipelago of low islands. We stopped frequently to observe the hardy creatures of the desert – cute bat-eared foxes, royal gemsbok and tough Kalahari lions – so it was already mid-morning when the bulky forms of the Baines baobab trees rose like an island above the horizon.

These giant trees have changed little in the 160 years since English artist-explorer Thomas Baines painted them.

As we ate lunch under the trees – at a table that had been set by camp staff before we arrived – it became clear that the winds of change were literally blowing on the horizon. Dark clouds shone through and we began to see occasional lightning far to the south over the vast Makgadikgadi Pans.

Just as the first large drops of water began to splash on the parched pots around us, a small herd of zebras appeared among the thorn bushes.

The moment was eerie – almost as if they had been summoned by that first splash of invigorating moisture. Soon a large herd of several hundred galloped past us, lured by the promise of rain and plentiful pasture.

An hour later, the rain was pouring down and we were wrapped – like sailors from the southwest – in waterproof ponchos as Mungomba set sail for a flooded landscape that seemed to turn into an inland sea. The water was rolling halfway up the tires by the time he returned to camp that afternoon.

In two days, the meadows would turn green and healthy. Thousands of zebras would cover these plains, dropping their foals and gathering the strength they would need for the 500 kilometer journey north.

Most Americans have an emergency fund, but 55% haven’t saved enough: survey