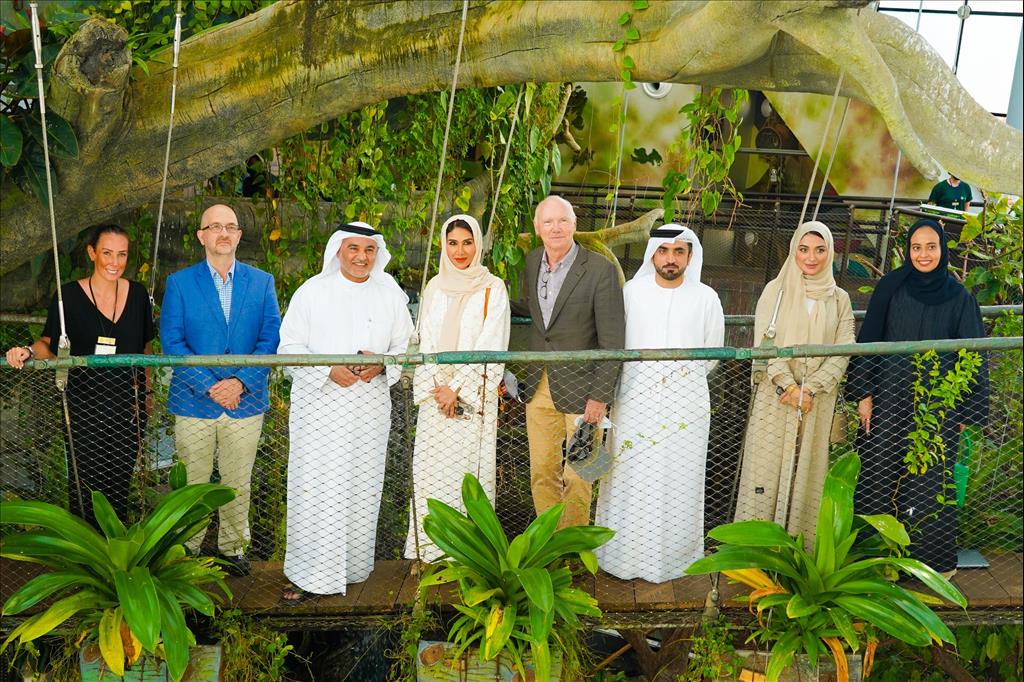 The first dispatch to La Planète Verte at the end of April was a couple of tamarins caught in the act. These resilient monkeys have adapted well to their new home and live in harmony with several other species, including a family of marmosets and a tamandua anteater.

Ahmad Hussain Bin Essa, COO of The Green Planet’s parent company, Dubai Holding Entertainment, said: “I am delighted to announce our partner exchange program with Dubai Safari Park, which I believe , is a positive step, not only for our destinations, but also for our visitors. The strength of this partnership will support the safe transition of animals between The Green Planet and Dubai Safari Park and allow adults, children and families to observe and learn about remarkable new wildlife.

Muna Abdelrazaq Abdelrahman Alhajeri, Head of Dubai Safari Park, adds: “We look forward to forging a harmonious relationship with The Green Planet that will not only provide visitors with the opportunity to see more amazing species, but will also allow us to create pioneering conservation. . program together that will lead the way in the Middle East and create a legacy that we hope will delight generations of wildlife lovers in the future.

The Green Planet welcomes tamarins into its successful conservation breeding program that helps the species survive. During the recent Eid holiday, The Green Planet also welcomed a pair of cotton tamarins, a relative critically endangered species native to South America.

Known for their eye-catching colorful hands, red-handed tamarins are an arboreal primate native to northeastern South America. They eat insects and fruit and can weigh around 500g, while reaching 25cm in length with extra 38cm tails. Found in the rainforests of Brazil, Suriname, Guyana, and French Guiana, red-handed tamarins have a life expectancy of around 20 years.

One of Dubai’s most popular attractions for residents and tourists, The Green Planet is a stunning four-storey bio-dome located in City Walk, Dubai. The interior rainforest is filled with over 3,000 plants and animals.

Sprawling over 119 hectares and home to over 3,000 animals, the Dubai Safari Park opened in 2017 in Al Warqa. The beautiful park is divided into five zones and has a strong commitment to conservation, education and sustainability.

About The Green Planet

The Green Planet is the only four-story glass bio-dome in the Middle East that invites guests to explore the planet’s fascinating flora and fauna through an immersive expedition to the tropics. Designed as a closed ecosystem, The Green Planet recreates the enchanting world of a rainforest with over 3,000 plants and animals and the largest indoor artificial tree in the world. Each of the four levels reflects a level of the rainforest: The canopy that forms the roof of the rainforest, absorbing the majority of sunlight and diffusing precipitation; The middle storey where trees typically have large leaves in order to absorb sunlight filtered through the canopy; The forest floor is damp, quiet and dark, where hardly any sunlight reaches the ground and the flooded rainforest complete with a giant aquarium filled with species such as arapaima, arowana and graceful stingrays . The Green Planet is also home to the region’s first bat cave which recreates the natural habitat of Seba’s bats and stays true to the comfortable, low-light environments in which they thrive. A host of animal ambassadors have been selected to be the heroes of The Green Planet, including Fluffy, the area’s only Bearcat. Located at City Walk in Dubai, The Green Planet inspires people of all ages and nationalities to learn about and care for every plant and animal that inhabits the earth, and offers awesome educational programs such as the Teens program ‘ Experience and the Zookeeper Experiences which give guests an even more enlightened experience in the enchanting world of the rainforest.

The Dubai Safari Park is home to over 3,000 animals, with 78 species of mammals – including 10 different carnivores and 17 primates – 50 types of reptiles, all living on the 119-hectare site at Al Warqa.

Dubai Safari Park offers five theme parks to explore. Explorer Village is home to the famous Safari Journey Tour, where visitors can embark on a driving discovery of animals from Africa and Asia. Guides feed guests’ curiosity with interesting fun facts about animals. The Arabian Desert Safari is a drive-in attraction, inspired by the vast deserts and species of the Arabian Peninsula. Guests learn about the animals and the conservation programs that exist to protect them. Asian Village features ornate architecture from the Asian continent. This village showcases animals that live in fearless forests or pristine ponds. African Village gives visitors a real taste of Africa, home to some of the world’s smallest and largest mammals such as gorillas, chimpanzees, African elephants and white lions. Visitors can visit the Reptile House the Grand Aviary inside the village. Kids Farm is where visitors can encounter farm animals including sheep, pygmy goats, ducks, chickens, donkeys and ponies.


Legal disclaimer: MENAFN provides the information “as is” without warranty of any kind. We assume no responsibility for the accuracy, content, images, videos, licensing, completeness, legality or reliability of any information in this article. If you have any complaints or copyright issues related to this article, please contact the provider above.

Do you have a lot of debt? You might want to make this important life insurance change