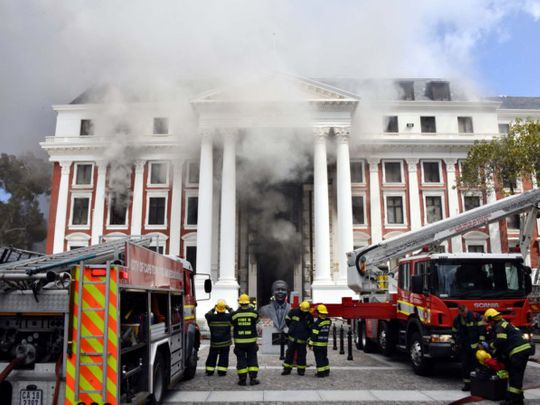 The devastating fire in the South African parliament is under control

Cape Town: A massive fire that destroyed much of South Africa’s parliament has been brought under control, firefighters said on Monday, the day before a suspect appeared in court over the blaze.

The fire broke out early Sunday in the oldest wing of the parliament complex, and dozens of crews fought throughout the day to put out the flames.

“The blaze was brought under control overnight,” spokesman Jermaine Carelse said, adding that the blaze was still burning in the part of the building where it started, which was completed in 1884 and has wood-paneled rooms.

â€œThe most damage is in the National Assembly building,â€ Carelse said. â€œIt won’t be used for months. “

Earlier, Parliament spokesman Moloto Mothapo said the roof of the National Assembly had collapsed and the fire was “so intense” in this part of the building that firefighters were forced to withdraw. .

â€œThe whole room where the members sitâ€¦ has burned down,â€ he said.

No casualties were reported.

President Cyril Ramaphosa told reporters at the scene on Sunday that a man had been detained and the building’s sprinkler systems had apparently failed.

â€œA man was arrested inside the parliament, he is still being questioned. We have opened a criminal case, â€police spokeswoman Thandi Mbambo said, adding that the suspect will appear in court on Tuesday.

The parliament building houses a collection of rare books and the original copy of the old Afrikaans national anthem â€œDie Stem van Suid-Afrikaâ€ (â€œThe Voice of South Africaâ€), which was already damaged.

The extent of the damage caused by the fire was still being assessed.

The presidents of parliament were to meet with Minister of Public Works Patricia de Lille on Monday to take stock of the devastation.

Jean-Pierre Smith, a member of the Cape Town Mayor’s Committee for Safety and Security, told reporters that the entire complex had suffered extensive water and fire damage and that “nothing” was left of it. the historical part.

This is where Parliament has preserved treasures, including around 4,000 works of art and heritage, some dating back to the 17th century.

These include the 120-meter-long (390-foot) Keiskamma Tapestry, named after a river in the southeast of the country, tracing the history of South Africa from the earliest indigenous peoples, the San, until the historic democratic elections of 1994.

After ravaging the older wing of the building, the flames spread to the newer parts of the complex that are currently in use.

Second fire in a year

About 70 firefighters were deployed on Sunday, some using a crane to spray water on the blaze. About 20 people remained at the scene on Monday to extinguish the remaining flames.

Images broadcast on television had previously shown giant flames leaping from the roof.

The area around the blaze was quickly cordoned off, with the cordon extending to a plaza where flowers were still on display in front of nearby St. George’s Cathedral, where the funeral of anti-apartheid icon, the Archbishop Desmond Tutu, took place on Saturday.

Cape Town has been home to the South African Houses of Parliament since 1910, when separate administrations formed a union under British rule and became a predecessor of the modern South African Republic.

The site includes the National Assembly and the upper house of the National Council of Provinces, while the government is based in Pretoria.

It was in parliament that South Africa’s last apartheid president, FW de Klerk, announced in 1990 his intention to dismantle the brutal white minority regime.

The Houses of Parliament consist of three sections, the most recent of which were built in the 1920s and 1980s.

In March, another fire also broke out in the old wings of parliament, but it was quickly brought under control.

Cape Town suffered another major fire in April, when a fire on the famous Table Mountain overlooking the city spread, devastating part of the University of Cape Town library which houses a unique collection of African archives.