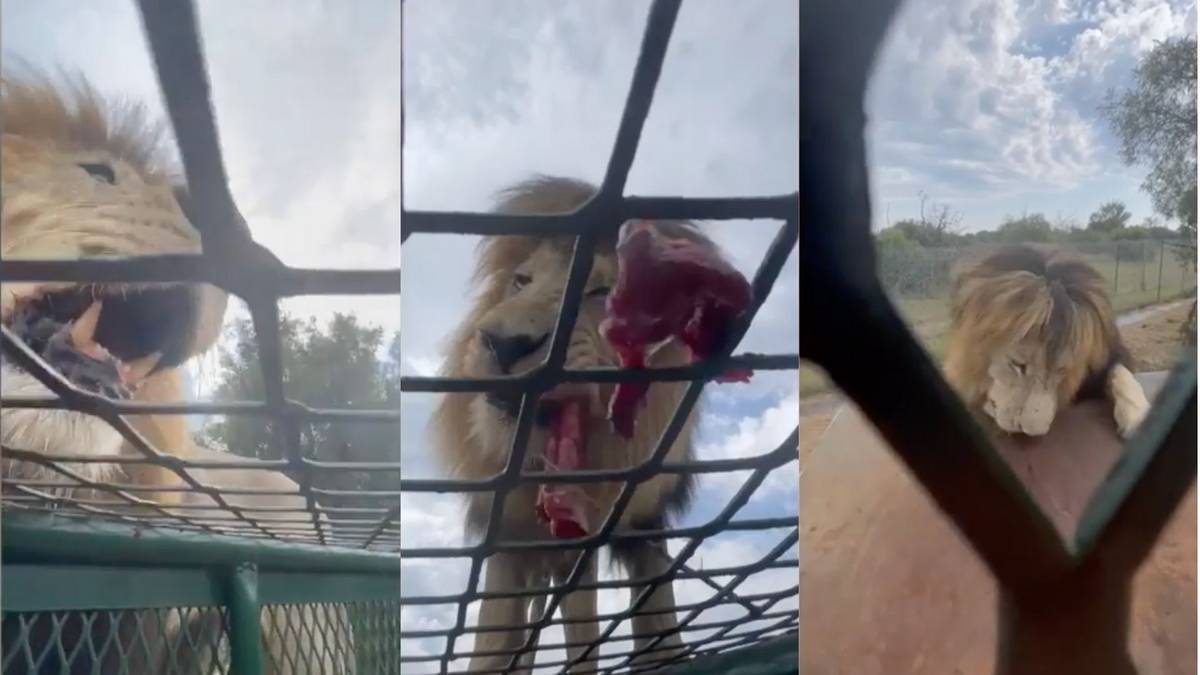 The lion sanctuary cages tourists so they can get up close to the big cats. Video/Dustin Campbell/Compass Media/T&T/AP

An American tourist has shared footage from inside a meat-covered cage surrounded by lions at a South African animal sanctuary.

Marakele’s ‘Lion Mobile’ in South Africa is not for the faint-hearted, according to video taken by Dustin Campbell.

The experiment locks visitors in a cage in the back of an open jeep, places large chunks of meat on top, and waits for the sanctuary lions to chase it away.

In the video, a large male lion climbs onto a platform in front of the cage, placing a gigantic paw on the platform before ripping through meat with his massive teeth.

Shortly after, a lioness appeared to take a bite.

A guide told visitors the “two youngsters” were 21 months old. However, the male already weighed between 280 and 300 kg, the guide said.

“In the wild, their average lifespan is about twelve years,” the guide continued. “In captivity, they can live up to twenty years.”

Suddenly, the male lion leaps onto the top of the cage, inches from Campbell’s head, causing a wave of nervous laughter from the group.

“Oh snap,” Campbell says, as the lioness looks directly at him, sniffing her head.
“I can feel her breathing down my neck.”

Looking back at the male lion, he captures the animal crunching on a piece of bony meat with his strong jaw.

When asked how many lions the sanctuary had, the guide replied “fourteen”.

The Marakele Wildlife Sanctuary guarantees visitors an “interesting and exciting educational experience”, which will enrich the lives of participants.

6 Genuine Ways to Get a Great Personal Loan