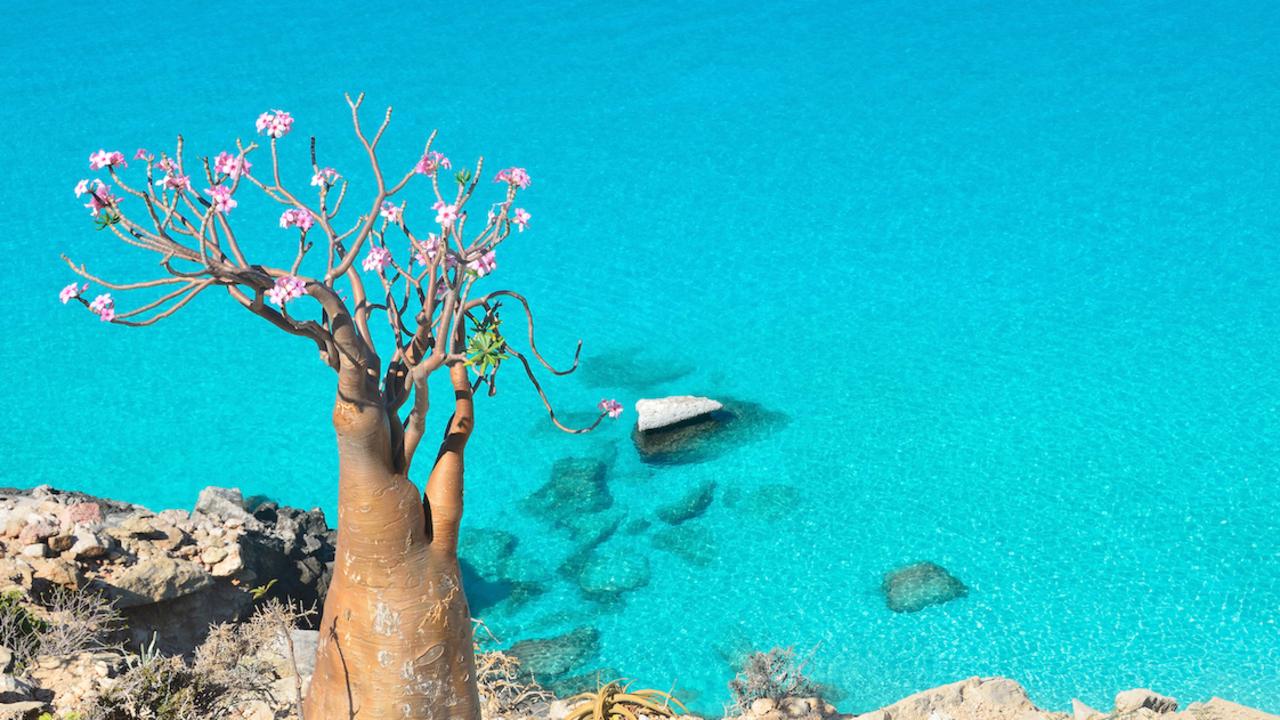 With only a handful of tourists a year, Socotra is considered the last unspoiled place in the world, but a visit there is not without risk.

With only a handful of visitors a year and wedged between the two volatile nations of Somalia and Yemen, Socotra is one of the last unspoiled places in the world.

Getting to the idyllic island isn’t easy – and it comes with risks. But for people who visit the island, including adventure traveler and realtor Doug Driscoll, any risk or cost of access is worth it.

Dubbed the “Galapagos of Arabia”, Socotra offers tourists an otherworldly experience, with many of its animals and plants endemic to the island.

The island also has a strong military presence which is there in a peacekeeping capacity due to the ongoing conflicts in Yemen and Somalia, both of which are within a few hundred kilometers of Socotra.

Speaking to news.com.au, Doug visited Socotra earlier this year and was one of only three foreigners on the island the week he went.

“It was epic. It was every bit as good as I had hoped and wished it would be,” he said. “It’s so unique…there are very, very few places left on the planet which are intact and intact.

“Literally five or 10 minutes into the trip you can see how disconnected it is from the rest of the world. It truly lives up to its title as the Lost Island of Socotra.

The only way to access the island is by using a technically designated humanitarian aircraft from Abu Dhabi in the United Arab Emirates, which has a set number of seats that it can allocate to paying tourists.

Trips to the island are strictly one week long, with the flight from Abu Dhabi making the weekly trip to drop off and pick up supplies.

The plane is also “notoriously unreliable”, Mr Driscoll said, but was blessed with a smooth trip.

Mr Driscoll booked everything through Crooked Compass – a travel agency specializing in challenging and experiential tours – particularly those that take Australians off the beaten tourist track.

He describes himself as a “flashpacker” – a tourist who goes on an adventurous trip but has money to spend.

The week-long trip to Socotra was one that required a fair amount of money with a guide and driver, necessary additions for tourists hoping to see the sights.

Crooked Compass took care of the driver, guide, all necessary visas and flights.

“Getting a visa for Yemen is a nightmare,” Mr Driscoll said.

“It’s really tough and it’s one of the hardest places to get a visa.”

In total, the week-long, all-inclusive trip cost Mr Driscoll around $12,000, not including his flights from Sydney to Abu Dhabi.

The adventurous traveler also has a warning for tourists who are enthusiastic about the idea and look of Socotra.

“I think I almost have a sense of responsibility to say that…this trip isn’t for everyone,” he said. “It’s very raw. It’s very rustic.

“If you’re someone who wants to laze by the pool with a pina colada, this isn’t the place. You’re lucky if you have running water and Wi-Fi.

“It’s certainly not without risks either…in the Global Peace Index, Yemen is the second most dangerous country, just behind Afghanistan.”

Despite this, Mr Driscoll maintains it was still one of the best holidays of his life and has urged people to go there before it is ruined by over-tourism.

“Socotra and mainland Yemen are two very different places and although there is a very clear and obvious military presence, which can be quite disconcerting, it has nothing to do with Yemen,” he said. declared.

“You see tanks and people with guns and stuff and soldiers everywhere, but they actually added a sense of security, not a threat in my opinion, because they were there in a peacekeeping capacity. peace.”

Mr Driscoll said he did not feel unsafe or threatened at any time and the townspeople ‘couldn’t have been friendlier, warmer or more hospitable’.

Away from the cities, more incredible sights await with locations that are better than some of the world’s most luxurious tourist destinations, Mr. Driscoll said.

“Nature, I call it mega nature. It’s on another scale and it’s completely preserved.

“A third of the plant species and they estimate that around 90% of the reptile species are endemic to the island. They don’t exist anywhere else in the world. So when you see this stuff, it’s completely foreign to you.

Mr. Driscoll described the island as something out of Jurassic Park.

“It’s like an alien world. It’s frozen in time,” he said. “There were times when I expected a dinosaur to walk around the corner.

“I mean, it’s really like a Jurassic Park in real life.

“There were so many times where I had to stop and say, ‘Wow, I just need to sit here and figure this out.’

“To put it in perspective, you have beaches there that will be comparable to the Whitsundays, mountains in the backdrop that are probably comparable to parts of the Alps.

“The sand dunes there are just insane and they would rival parts of the southern tip of Africa in places like Namibia, the caves were as impressive as any you walk into, like the Yucatan in Mexico , canyons that wouldn’t look a place in Arizona.

Mr Driscoll said the island’s latest weird quirk was the lack of Covid.

“Covid doesn’t exist there. It was the only thing, it was a week without Covid. Nobody wears a mask, nobody talks about it and it’s weird to talk about things other than Covid”, he joked.

Thula ESV — An electric 4×4 made in South Africa