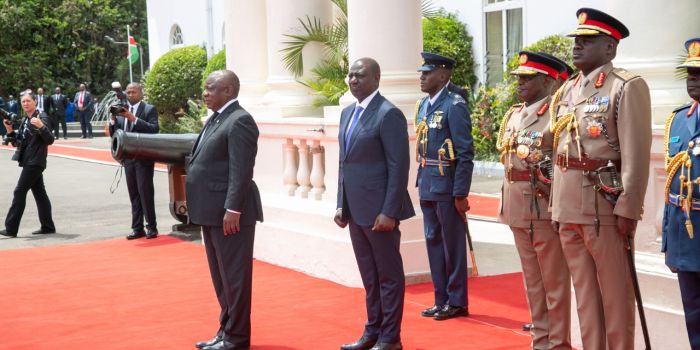 The agreement has opened up opportunities for the two countries which enjoy cordial bilateral relations. But what likely received a boost after the announcement was the tourism sector.

Like Kenya, South Africa is a dream destination for many tourists worldwide and is among the most popular travel destinations in Africa, and for legitimate reasons.

The map showing the route between Kenya and South Africa

The Mzansi Nation is known for its rich culture which spans from its ethnic diversity, beautiful wildlife in the golden savannah, ocean blue beaches, captivating game drives, impressive gorges, historic buildings, delicious cuisine and a life of active party for people who plan to relax with dance and music.

Return flights to the southern destination range from a pop-up fare of 80,875 Ksh to 114,200 Ksh depending on the city chosen.

The country offers a range of accommodation options, from five star opulence to budget locations, you are sure to find exactly what you are looking for, at prices ranging from Ksh 5,000 to Ksh 50,000 per night, highly dependent the kind of experience you are looking for.

Below are some of the top-ranked destinations to look out for:

Kruger National Park is one of the best game reserves in Africa and one of the oldest in South Africa.

The park is a four-hour drive from Johannesburg and offers visitors the chance to see the ‘Big Five’: lion, leopard, buffalo, elephant, and rhinoceros, as well as an astonishing diversity other wild animals. It is also home to cave paintings and archaeological sites of San (bushmen).

The entrance to Kruger National Park in South Africa

Considered one of the most breathtaking cities on the planet, the multicultural city is surrounded by nature and sits between a rugged mountain range and the sea.

One of the top things to do in Cape Town is to visit Table Mountain, a flat peak that towers over the city.

For a spectacular panorama, hike to the top or glide down the cable car. The hour-long hike to Lion’s Head also offers scenic views.

Watch penguins waddle along the golden beaches of False Bay and south of town at Cape Point. Other places to visit are Victoria and Alfred Waterfront.

An Image file of an aerial view of Cape Town

Among the great diversity of wildlife, this vast conservation area is home to the famous black-maned Kalahari lion and other diverse animal species.

Also known as Jo’burg, it is South Africa’s largest city by population and a gateway for many safari tourists. Named the “city of gold” for its rich deposits of precious ore, it is also the economic engine and the vibrant soul of the country.

Top things to do in Johannesburg include visiting the Apartheid Museum, a poignant look at the oppression of apartheid at the birth of democracy; Constitution Hill; and Gold Reef City, which traces the area’s history through mining-themed attractions.

A photo montage of the city of Johannesburg in South Africa.

Located along the country’s southeast coast, the Garden Route stretches for around 200 kilometers through some of South Africa’s most breathtaking coastal scenery. The route stretches along the Indian Ocean from Mossel Bay in the Western Cape to the Storms River in the Eastern Cape.

The spectacular Drakensberg, which means “Mountains of the Dragon”, is one of the best places to visit in KwaZulu-Natal and a popular holiday destination. It is also home to the highest peaks in the country.

An aerial view of the Drakensberg, KwaZulu-Natal also known as the Dragon Mountains in South Africa.

Part of Table Mountain National Park, the landscape is loved around the world for its stunning land formation, diverse wildlife and unique flora. It records an annual average of one million visitors visiting the iconic attraction.

Pilanesberg National Park is home to prolific wildlife and a dazzling diversity of birdlife about three hours from Johannesburg and Pretoria. It’s a great day trip or multi-day stay.

The sprawling seafront promenade known as the Golden Mile is a legendary Durban tourist attraction and a great starting point for a city tour. The long blond beaches attract swimmers and surfers.

Robben Island, a World Heritage Site, is a haunting reminder of the horrors of apartheid. Legendary statesman Nelson Mandela spent 18 years imprisoned in a tiny cell here along with other political rebels and social activists.

The entrance to Robben Island prison in South Africa.

Free movement of persons: the African Union requests the support of the Economic Community of West African States (ECOWAS)