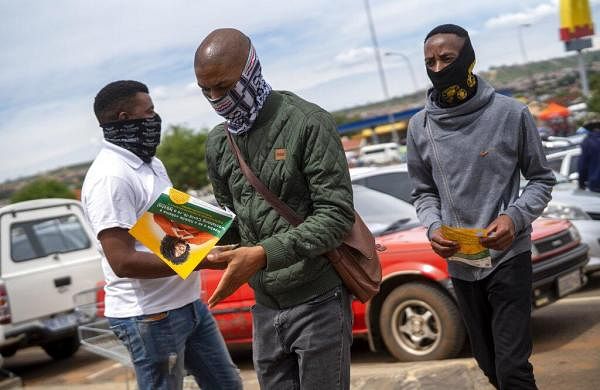 KAMPALA: Omicron cases have been confirmed in at least nine African countries, with some officials reporting that the first cases appear to be mild.

South Africa remains the epicenter of the omicron outbreak, with experts saying the overwhelming majority of its thousands of new cases per day are of the new variant.

In East Africa, Uganda reported its first seven cases of omicron on Tuesday.

The variant was detected in travelers from South Africa and Nigeria who arrived at Entebbe International Airport on November 29 and are currently in isolation, clinical services director Charles Olaro said.

Five are from Nigeria and two are from South Africa, she said.

In southern Africa, Namibia has confirmed 18 cases of omicron, none of which have been hospitalized, the country’s Health Minister Kalumbi Shangula said.

Early evidence suggests that omicron is spreading faster, but initially symptoms appear to be mild, he said.

â€œCases are increasing, but admissions are low,â€ Shangula said of hospitalizations.

Omicron quickly became the dominant variant in Namibia, he said.

“Omicron is a new variant, even more is known about it, its behavior and the effect it will have on the trajectory of the pandemic,” he said.

Nigeria confirmed three more cases of omicron on Tuesday, bringing the number of confirmed cases of the variant in the West African country to six, according to the Nigeria Center for Disease Control.

The recent travel bans imposed on South Africa and neighboring countries in response to the discovery of the omicron variant in southern Africa have hammered the country’s safari activities, already hit hard by the pandemic.

The South African tourism industry has suffered a drop of more than 70% in the number of foreign tourists in 2020, with COVID-19 being responsible for the drop from around 15 million visitors in 2019 to less than 5 million in 2020.

Britain, the biggest source of tourists to South Africa, lifted its “red list” travel restrictions in South Africa in October and safari operators were starting to see an improvement in the outlook for the season. holidays and 2022.

But then news of omicron hit, resulting in yet another round of international restrictions on flights.

South African President Cyril Ramaphosa has criticized travel bans imposed by Britain and many others, including some African countries, as “hypocritical, harsh and unsupported by science”.

He denounced the restrictions as “travel apartheid”.

With just four guests this weekend, Plachesi said his business was feeling the damage.

He believes the travel bans imposed on South Africa are unfair and will have a negative impact on the South African people.

He hopes many countries will reconsider their flight bans and re-allow travel to and from South Africa.

“The year 2022 was looking pretty bright as the borders were now open and everyone was happy,” Plachesi said.

“We were starting to get booking confirmations. It was looking good.”

But now it’s gloomy about the coming year.

â€œSo the international guests and the rest cancel. “

Among the few guests who stayed overnight at the lodge were South Africans Tebogo Masiu and Smagele Twala, who wanted a break from their schedule in Johannesburg.

They said they were dismayed by the new travel restrictions in South Africa.

“For people running businesses connecting South Africa and other countries and upping South Africa’s economy, this is damaging,” said Masiu, sitting in an empty bar with only company. his partner and the owners of the lodge.

With the outlook bleak for 2022, Plachesi and his business partner are trying to keep empty rooms ready in the hopes that at least local visitors will embark on a safari.