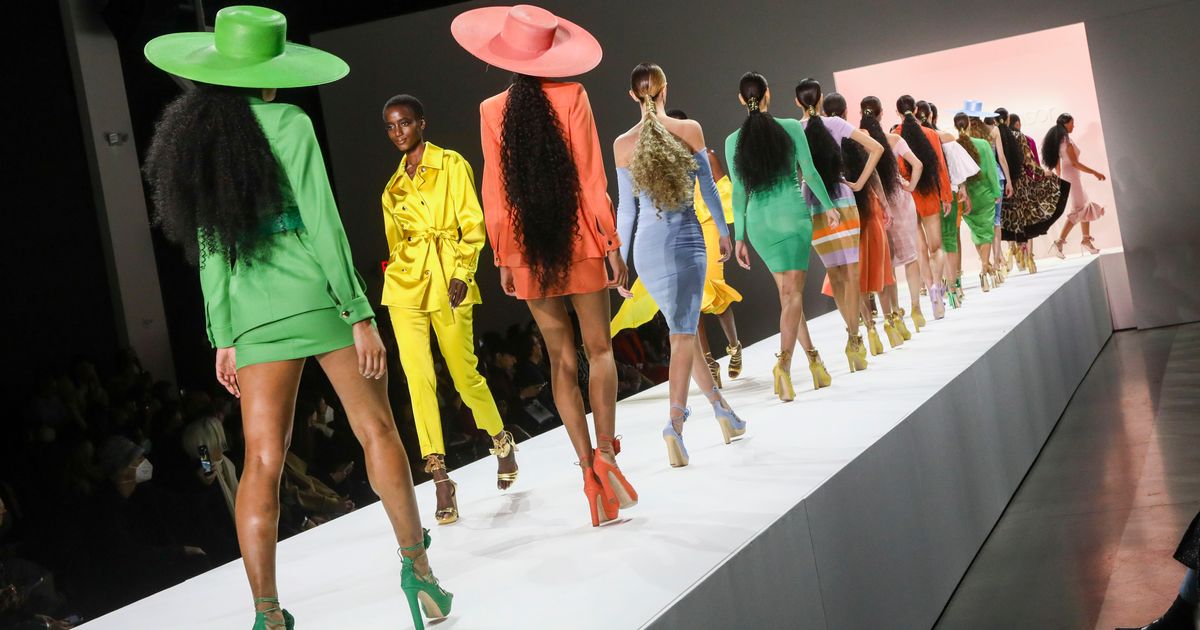 But attitude was just as important as color in Hudson’s latest collection, some of which went on sale immediately.

There were mini dresses with bouncy ruffled hems, tiny sets of shorts and delicious pantsuits in bright greens, purples, sunset oranges and sunny yellows. He played with a safari-appropriate brown animal print, using it for a range of looks, from a lighter-than-air coat worn with a simple brown dress to a sleeveless evening sparkler.

And when Hudson talked about girls and women, he meant it.

Webb, the first black model to land a long-term contract with a major cosmetics company (Revlon in 1992), walked in a purple miniskirt and zip-up jacket with large safari-worthy front pockets. Zelauy, the Brazilian icon of the 80s and 90s known for her emotive modeling style, showed off one of Hudson’s figure-hugging party dresses in bright green. Johnson, the first African-American model to appear on the cover of American Vogue in 1974, donned a sexy and sweet pink dress with a wide ruffled hem.

“I just believe in inclusivity,” Hudson said. “Like, it’s not all about 25 or 22 or some of these girls. These girls don’t buy my clothes. Women over 30 buy my clothes. So why not watch the runway and see, OK, this woman is wearing what you could be wearing? That makes sense to me. Women keep looking beautiful, sexy, smart. They’re even smarter at this age, so why not?

And some of the women at Hudson care about sun protection. He gave away a few huge wide-brimmed hats to top off the sunset-colored mini ensembles.

Hudson has been a vocal critic of the lack of racial diversity in the industry he loves.

“I think that’s changing. I’m very proud of the fashion industry because the doors have opened and people are more and more open to conversation,” he said. “There was no room for us and I feel like they opened the door. We are designers like everyone else.

Hudson’s career was launched in 2013, when Rihanna chose her black prom dress in Bravo’s “Styled to Rock” fashion contest. He launched his eponymous ready-to-wear brand the following year. Since then, he’s dressed everyone from former first lady Michelle Obama (those custom-made burgundy pants and belt at the 2021 inauguration) to Beyonce and Jennifer Lopez.

“There are a few people I’m dying to dress, but there’s one event I really want to and that’s the Oscars,” the 36-year-old South Carolina native drawled. “I don’t hesitate to want to be the designer that everyone wants to wear. I’m trying to create a legacy so people can watch and say, “OK, this black man did this.” Now I can do it. I had no one who looked like me to turn to.