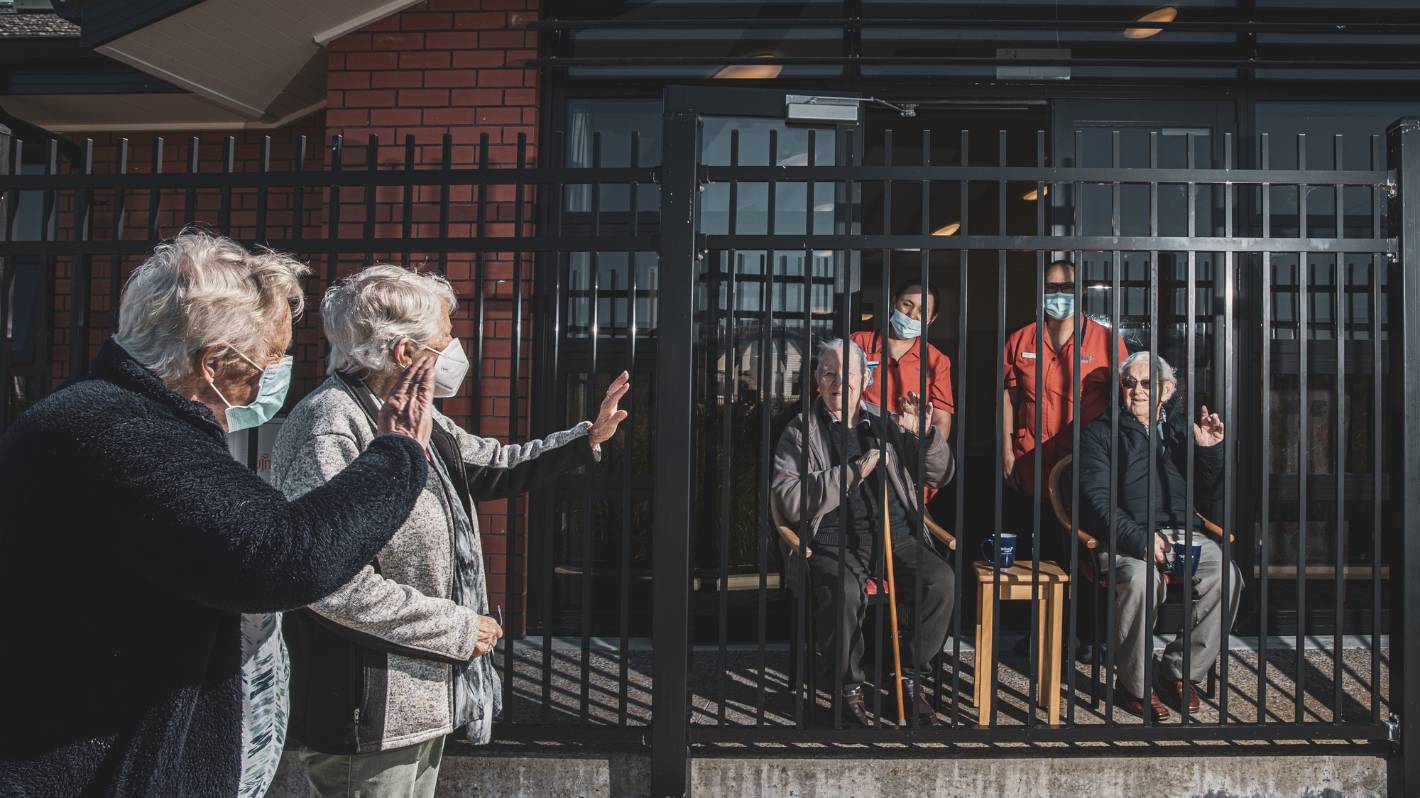 Marriage Through the Window: How Dementia Residents See Their Loved Ones Safely During the Covid Outbreak

Over six decades ago, they met on a dance floor in Gisborne.

Now, Covid has Joan and Robert Cooper meet through a window or the fence of the Hamilton dementia care unit in which he stays.

These moments are bright moments in what might otherwise be lonely days of confinement, thanks to the staff at Radius Glaisdale bringing him to the window if he sees her on his daily walk.

Residents also get special attention from passers-by, following a suggestion from a local woman on social media.

READ MORE:
* Coronavirus: when you can’t remember why no one is visiting you
* Six million team? MIQ fighters tell their stories
* Covid-19: relief as Northland moves to alert level 3, let’s hope level 2 is not far away

Shirley Ratcliffe, a friend of the Cooper’s whose close friend Len Cuthbert is also in the dementia care unit, also makes visits from outside the Flagstaff facility.

“They get mad if they can’t see us.

Level 4 tours were through a window, but at level 3 men can have a cup of tea outside the unit, women on a nearby aisle.

“The good thing is we don’t have to walk,” said Robert Cooper with a chuckle.

He and Joan Cooper got married 64 years after meeting at a ball in Gisborne.

While living in Kaipaki, Robert Cooper trained racehorses, and the couple also traveled the world and toured New Zealand in a motorhome.

“I just miss him and wish I could have him at home,” Joan Cooper said.

He was driving from Tauranga for groups to the Hamilton Workingmen’s Club on Saturday evenings.

The two had lost their spouse and, although not having a romantic relationship, “we’ve been looking after each other for years,” Ratcliffe said.

Being able to see yourself, even from afar, is huge, she says.

“I can come every day and it makes me exercise, and it helps me as well as he does. “

Understanding the lockdown can be difficult for people in dementia care.

Seeing loved ones – even from afar – helps reassure and relax them, and staff are seeing the benefits as well.

Residents also commented on the waves and extra smiles from passers-by, the result of a social media post by local woman Aimee Lockie.

During a walk on Tuesday with his 9-year-old son Carter, they spotted residents of Radius Glaisdale through the window and waved to them.

“A woman’s whole face lit up,” so Carter decided more people should do the same, Lockie said.

His social media post to this effect received several hundred likes, and on the next day’s walk, a resident told him “so many people passed by today and they all waved at me… that’s Magnificent “.

Meanwhile, Carter was planning a large cardboard sign to help communicate with residents, and on Thursday filed letters for them.

Residents have stayed connected in other ways, Rosevilla said, including virtual vacations.

“When we went to level 3 they had take out pizzas because it was a big change that everyone was having and we didn’t want our residents to miss it,” Rosevilla said.

Pet therapy and family pets can’t get in, so the maintenance man has built an aviary for the newly purchased African lovebirds.

There’s also an online church, letters from grandchildren, and special celebrations for birthdays and other occasions during the lockdown – complete with masks and social distancing.

DOES AFRICA NEED CUBA? | THIS DAY