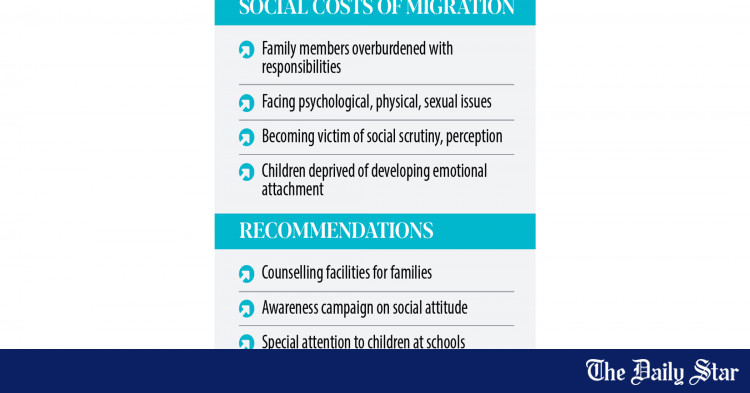 Left behind, left uncared for

Since her husband migrated to Saudi Arabia as a worker in 2018, Kulsum Begum (not her real name) has been caring for their family in Tangail.

In addition to taking care of food and health care, the 30-year-old has to take care of the education of her ninth-grade daughter and her fifth-grade son with the money her husband sends home, although irregularly.

For all the latest news, follow the Daily Star’s Google News channel.

“It’s not an easy job. I have to stay stressed all the time,” Kulsum said.

What makes the mother more worried is the money – Tk 3 lakh – which her husband borrowed from a local moneylender before his migration. She cannot yet pay a deposit because the money she receives from her husband is not enough to support her family, let alone repay the debt.

“Sometimes I seek support from my parents who live nearby,” she said.

Like Kulsum, many left behind family members, especially women, face such problems in the absence of their male members, but this problem remains largely ignored in government policy.

There has not been much research on the social cost of migration in Bangladesh, but a research book published in 2020 by the Refugee and Migrant Movements Research Unit (RMMRU) shed some light on the question.

Titled “Social Cost of Migration: Left-behind Children, Husbands and Wives in Bangladesh,” the book states that although the economic gains from migration benefit the nation as a whole as well as migrant households as a unit , the “social costs of migration” are mainly borne by individual household members.

As a perceived social cost of migration, about 70% of women left behind expressed pain at being left without a husband, while 67% are burdened with additional responsibilities, the book says.

Thirty-five percent experience psychological stress and regularly encounter the social perception that they are “living a comfortable life spending their husband’s hard-earned money”, he said.

At least 45% of the wives have had to face psychological, physical or sexual problems, while 30% of them, being single mothers, are overwhelmed by the problems related to the education of their children.

About 40% of wives complained about “social scrutiny” as they are often “judged” by in-laws, neighbors and others.

RMMRU founding chairman Prof Tasneem Siddiqui, one of the authors of the book, said there had been no government action in terms of welfare. Instead, families fend for themselves.

Their study shows that about 15% of children left behind fail to cope in the absence of their parents. “These children need special attention at school,” she said.

Contacted recently, Shoaib Ahmad Khan, Director (Finance and Welfare) of the Wage Earners’ Welfare Board, said he had no specific initiative to address the social cost of migration.

The question is “important and requires further research”, he said, adding that the welfare of migrants will be widely addressed in an upcoming project with financial support from the World Bank.

Improve your credit with a debit card

‘My dream for the art, culture and tourism sector’ | The Guardian Nigeria News