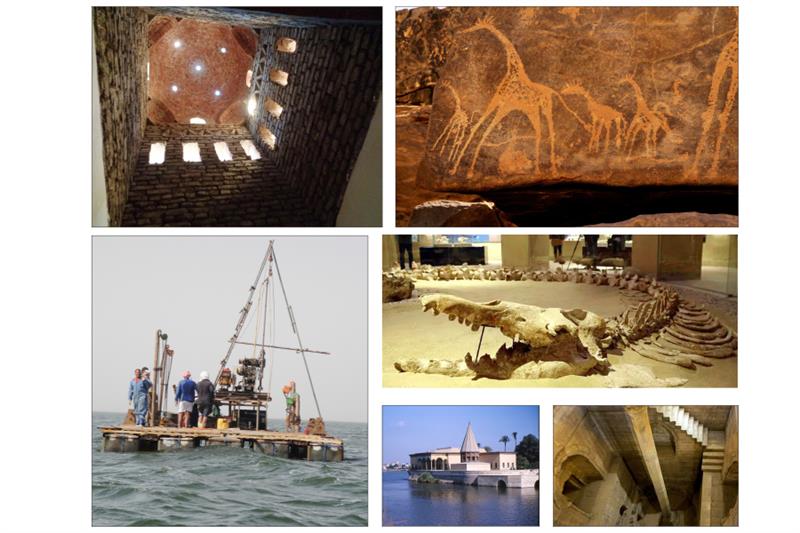 The current predicament of the deleterious effects of climate change around the world is perilous and requires a thorough investigation of similar critical events in the distant and more recent history of mankind.

Archaeologists and historians have been interested for decades in how climate change has influenced the course of human civilization in the past.

In Egypt, where the UN COP27 on climate change will be held in November this year, many archaeological sites and other historical places bear witness to the impacts of climate change on the course of Egyptian civilization.

I myself have conducted fieldwork and archaeological research at many of these sites over the past 50 years, publishing over 200 scientific papers in international journals.

These sites are exceptional places where people can learn more about climate change and its influence on past societies, but also, and above all, about how people in the past adapted to it. Visits to these sites in association with the COP27 conference could provide foreign visitors as well as Egyptian nationals with first-hand experience of past records of climate change and the dramatic consequences of its impacts on human societies.

There are at least three sites worth visiting in this regard: the Nilometer on Roda Island in Cairo; Lake QarOun in the Fayoum depression; and the village of New Gourna built by Egyptian architect Hassan Fathy on the west bank of the Nile at Luxor in Upper Egypt.

There are also many sites in the eastern and western deserts.

Studies of Roda Nilometer records of the maximum height of the Nile when it flooded and its lowest level every year since the 9th century CE reveal the pattern of Nile floods in response to the effects of global climate change on the amount and seasonality of rainfall in equatorial Africa and Ethiopia.

Another study found the relationship between climate change and extremely high or low Nile floods on famines and political unrest in medieval Egypt. These records, spanning more than 1,200 years, are unprecedented since instrumental records only date back to the 18th century.

There is ample evidence of the social, economic and political consequences of medieval climatic anomalies in Egypt during the rule of the Fatimids and Mamluks, as well as in the late 18th century just before the Napoleonic invasion. These climate anomalies are associated with global events known in Europe as the Medieval Warm Period and the Little Ice Age.

An even longer record, dating back more than 10,000 years, has been extracted from sediments at the bottom of a huge lake that once covered the entire Fayum depression, with its shores over 20 meters above sea level.

For comparison, the current level of Lake Qaroun in Fayoum is 45 meters below sea level.

Sediments obtained using a systematic grid of drill cores from this lake provide an extraordinary view of the ups and downs of the Nile floods that entered the depression through Bahr Yusuf. Records clearly show a deeper lake associated with higher rainfall and with its sources in the White Nile and Blue Nile 10,000 to 7,000 years ago.

They also reveal changing climatic conditions 7,000 years ago, when the global climate began to get cooler and drier. This was at a time when studies of the sediments of the Egyptian Sahara also reveal the onset of desiccation that led to the emergence of today’s arid desert landscape.

6,000 years ago, attempts to cope with the impact of climate change on Nile floods and consequently on the food security of farmers in the Nile Valley led to cooperation between the small states of the era and the emergence of provincial states that were finally unified 5,000 years ago to form the first nation state in history.

It is a lesson on the path to unity, as President Abdel-Fattah Al-Sisi said in a speech on COP27 when he said it was a way to fight “against an existential threat which we can only overcome through concerted and effective action”. Implementation.”

The remarkable Fayum record also explains the mystery of the sudden collapse of Egypt’s Old Kingdom, a glorious period when monumental pyramids were built over a period of over 478 years (2630 to 2152 BCE).

Studies in the Fayoum have revealed that a sudden climatic event around 2,200 BCE caused a sharp and severe drop in the Nile flood volume for about 20 years. A severe famine depleted the royal treasury and therefore led to the collapse of centralized power.

Renewed unity after a turbulent period of around 200 years led to the re-emergence of a unified Egyptian state during the Middle Kingdom. This unity was based on a new ideological creed that made the ruler the protector of the poor and oppressed, as well as on the reform of the state bureaucracy.

While technical innovations have been attempted, including the digging of canals and the construction of a dam to manage the flow of water into the Fayoum depression and the flow of water towards Middle Egypt to the area of the Giza pyramid, larger floods subsequently destroyed this dam. It was rebuilt later in Greco-Roman times and more recently in the 18th century at Al-Lahun. The two earthen pyramids of Al-Lahun and Hawara at the entrance and at the end of the waterway linking the Fayoum depression to the Nile testify to this first state hydraulic project.

As for climate tourism, a visit to Fayoum today could include a trip to see the high shores of the ancient great lake. There are also the remains of two large stone pedestals that once supported the colossi of Amenemhat III at Biahmu in the northern Fayoum which testify to the recovery project during the Middle Kingdom.

Sediments on the collapsed fragments of the plinths document the larger floods that destroyed the dam here later. A visit may include excursions to the Al-Lahun and Hawara pyramids and associated archaeological sites. It wouldn’t be complete without a trip to Wadi Al-Hitan, a World Heritage Site containing the remains of whales stranded when sea levels dropped due to colder and drier global weather conditions 37 million years ago. ‘years.

The Climate Change Museum in Wadi Al-Hitan, conceptualized by the present author and designed by architect Gabriel (Gaby) Mikhail and inaugurated in 2016, is the first such museum in the world. More recent climate museums have since been launched in the US, UK and Norway. The New York Climate Museum saw its first exhibition in 2017.

Additional visits could be made to marvel at the remains of ancient lakes in the oases of Baharia, Farfara, Dakhla and Kharga which testify to a wetter climate in the region 12,000 to 7,000 years ago.

The desert then bloomed with summer rains from the south. Rivers and runoff fed lakes in many depressions. Prehistoric peoples gathered around the water sources and left traces of their settlements as well as spectacular rock art such as that at Djara Cave and the Hidden Valley Rock Shelter and further south in the regions of Uweinat and Gilf Al-Kebir.

There are many other sites containing geological and archaeological evidence of climate change in the Eastern Desert, such as Wadi Sannur and Nimr Cave. Evidence from both the Eastern Desert and the Eastern Sahara provides ample evidence of the cold, dry conditions at the time that motivated herders and hunters from Southwest Asia to cross the Sinai Peninsula and arrive in the coastal areas of the Red Sea.

They then crossed the desert wadis and headed for the western desert where they settled before descending into the Nile valley and delta where the earliest evidence of agriculture and herding is known from the Fayoum and Merim of Beni Salama in the western delta.

A third heritage site that could be the subject of a climate tour dates back to the 1940s when Egyptian architect Hassan Fathy undertook a pioneering project to provide adequate and affordable housing for the villagers of Gourna in Upper Egypt.

His work is immortalized in his book Architecture for People (also known as Architecture for the Poor) and aimed to provide housing using local materials and local labor that matched the traditions of the local community. and at the same time provided natural ventilation, light, and environmental comfort.

During a recent workshop organized by the Hassan Fathy Center for Architecture and Sustainable Development and the United Nations organization UN-Habitat, Hassan’s contributions to the adaptation of houses to climatic conditions were reviewed. They anticipated the measures currently envisaged by contemporary architects, such as the use of local and recycled biodegradable materials (raw brick, stone and wood), the construction of structures, walls and ceilings from local materials to avoid climate costs of transport and passive energy. design to ensure adequate ventilation, reduced heat loss and maximum light utilization.

The village of New Gourna that Fathy built is halfway between the Nile Ferry and the monuments of the Theban Necropolis World Heritage Site in Luxor. Visiting it would also be an opportunity to see ancient Egyptian constructions using earthen architecture at the Ramesseum and the recently discovered “City of the Ascension of Aten”.

Egypt has much to offer foreign visitors as well as Egyptian nationals in planning the world’s first experience of climate tourism, with the educational impacts and awareness of climate change and the adaptive responses that this entails. This would place Egypt at the forefront of pioneering efforts in global tourism, while reaping the socio-economic benefits of this new type of tourism.

COP27 in Sharm el-Sheikh in November would also be an ideal opportunity to launch this type of tourism in Egypt.

*The author is an archaeologist.

*A version of this article appeared in the August 25, 2022 edition of Al-Ahram Weekly.