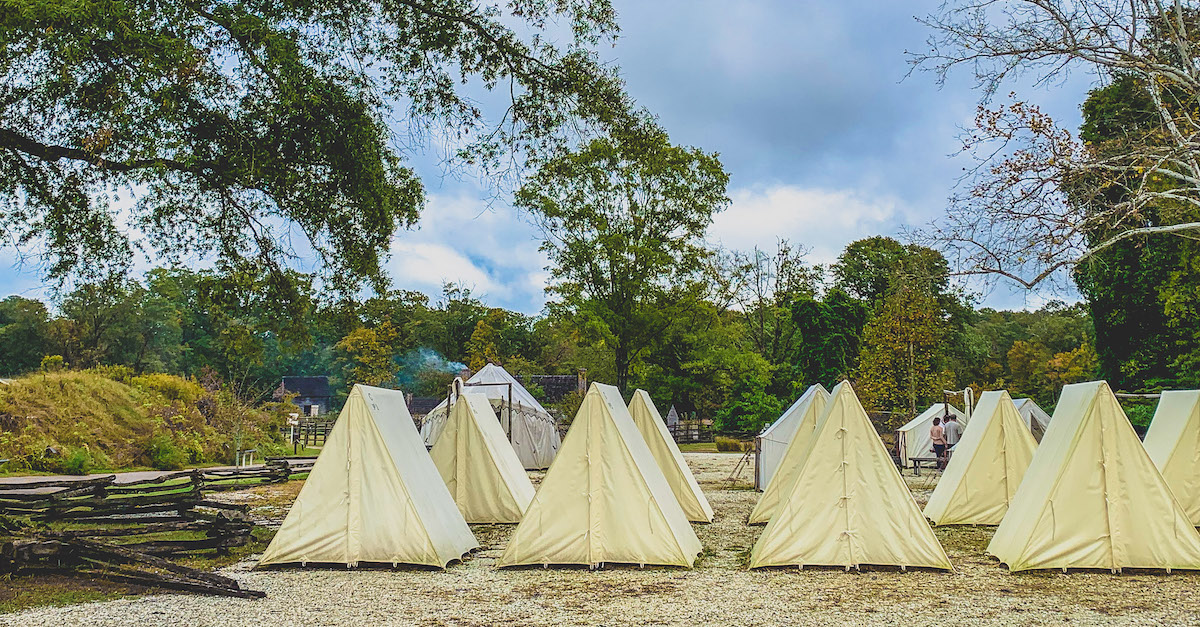 How to Spend a Perfect Day in Historic Yorktown, Virginia

Yorktown, Virginia offers lush green fields and storied farms where you can walk in the footsteps of America’s Founding Fathers. And it sits on the banks of the York River. Its location on this waterway led to its involvement in the famous Revolutionary War battle. Both sides relied on the Navy ships plying the river. Whoever held Yorktown controlled this important waterway.

The city is compact and you can walk along the river. Lots of delicious local cuisine is at your fingertips. The water is perfect for kayaking and paddle boarding. Add a sandy beach, art galleries, specialty shops, and a graceful bridge, and you have a charming place to spend a memorable day.

Yorktown invites you to explore the momentous battle that played a crucial role in shaping the United States. On a recent day in Yorktown, I visited these sites and was amazed at the quality of everything from the museum exhibits to the recreated military encampment to the battlefield tour. Here are the top things to do in Yorktown. Plan your day according to your interests and enjoy!

Start at the Museum of the American Revolution in Yorktown

Start your day of sightseeing at the Museum of the American Revolution in Yorktown. Here, across from the York River, this brick museum contains a surprising number of exhibits that bring the events of the birth of the United States to life. After getting your tickets, watch the intro movie, freedom fever for an overview of the 1770s and 1780s. The story is told by a traveler in the 1800s who collected stories of the American Revolution.

Next, head to the exhibits that feature military hardware, maps, prints, and personal effects. Interactive exhibits are mixed in, along with other great videos. Arranged in chronological order, the sections of the museum end with a look at the new nation. The challenges facing the nascent United States are detailed, with the Constitution finally dealing with an official framework.

Be sure to go to the theater which shows a 4D experience of the siege of Yorktown. You are on the battlefield in 1781 with wind, smoke and thunderous cannon fire. The actors play General Washington, an Army sapper who helped build fortifications at Yorktown, and Sarah Osborn, who followed the Army to serve food and coffee to the troops. Alexander Hamilton plays the leader of his troops as he calls out “Rush on boys!” when they attack the last British defences.

Pro tip: After a morning in the museum, you’ll be ready for lunch or snacks. A small cafe is open seasonally and serves sandwiches, soups, and cornbread. The souvenir shop also offers food and drinks.

Travel back in time to the Continental Army Encampment

After browsing the museum, head to the living history exhibits located in a clearing at the edge of the forest. These are included in your admission ticket.

First you come to the Continental Army encampment, with its rows of white tents. Here, the daily life of a Continental Army soldier is recreated in fascinating detail. You are free to interact with the historical interpreters. They are happy to answer questions, so don’t be afraid to speak up.

The “kitchen” is formed by a dry earthen ditch, with an earthen mound in the middle. The cooks prepare the meals there over a wood fire. Nearby, a soldier demonstrates how to load and fire a musket.

The surgeon’s tent turned out to be the most interesting for me. You can chat with the surgeon and learn about 18th century treatments for injuries and illnesses. He talked about the amputation procedure while holding the saw. Then he explained that General Washington required that all men in his army be vaccinated against smallpox. Cuts were made in the arm, then the “vaccine” was poured. Pre-hypodermic, it was primitive but effective.

Pro tip: Watch your step here. As I watched the musket firing demonstration, a commotion several yards away caught my attention. Two men carried a staff about 6 feet long with a snake hanging from the ends. They threw the serpent into the forest; as in camp, said the musketeer. I carefully watched where I stepped after that.

Learn about life on a revolution-era farmhouse

From the army encampment, proceed to enter the adjacent Revolution-era farmhouse. The Farm provides a detailed insight into the Edward Moss family from records kept in the late 1700s. The family had four children. The slaves worked on the farm and you can enter the slave cabin.

Take the time to stroll along the paths and meet the historical re-enactors. In the kitchen, the young woman told us that fresh cornbread had been prepared that morning. Tobacco is hung to dry in a shed.

In a fenced area with chickens strutting around, a fluffy cat wandered around and then lazed around in the sun. It is named Rochambeau in honor of the French general who helped the Continental Army win the Battle of Yorktown. “Beau” is obviously a staff favorite.

Notice the details such as the bay windows in the main house. These are clues that this family had status in the community, although the buildings are small and primitive by today’s standards.

The land includes an orchard of fruit trees and fields for the cultivation of corn, tobacco, wheat, flax and cotton. These cash crops were sold and the money was used for food and other necessities.

Explore the history of the Revolutionary War on the battlefield tour

Yorktown Battlefield is where you can literally walk in the footsteps of the men of the Continental Army. George Washington and Alexander Hamilton walked through these fields. You can imagine the army, weary after years of war, racing down the 450 miles from New York and quietly moving into position overnight.

This well maintained battlefield is administered by the Colonial National Historical Park. Start at the Battlefield Visitor Center. See the short orientation film and the small museum. Pay a small fee to enter the park and download the Yorktown Tour Guide app. Then go on a guided tour of the battlefield.

Signs with large red arrows are easy to follow as you navigate from point to point along the six-step tour. Hear an explanation of each stop, with options for more in-depth content.

You can stay in your car and complete the tour in about an hour. But it’s amazing to get out at every stop and walk along fields, trenches and berms. Read the plaques at each sight for a concise overview of what happened there.

Stopping at redoubts 9 and 10 made it possible to circumvent and cross these British defences. It was there that young Alexander Hamilton led the charge, along with his French allies. These two redoubts were the last line of British troops guarding the city. Once these redoubts fell, the British had few options. General Cornwallis sent word of surrender. The final stop on the tour is Surrender Field, where the British marched for formal surrender, essentially signaling victory for the Continental Army, although the war continued for some time after.

If you have the time and the interest, you can continue with the visit of the Allied camp by following the yellow arrows on the signs. This tour takes you to places where American and French troops camped during the Siege of Yorktown.

Pro tip: Are you a Civil War buff? Battles took place in this same vicinity. Throughout the battlefield tour, you will park at the entrance to Yorktown National Cemetery. Take the time to visit this resting place of over 2,000 Union and Confederate soldiers. Read some of the headstones. Many have names but most are unknown soldiers. It’s a peaceful place marking another tumultuous period in US history

Stroll along the waterfront and river promenade

Riverwalk Landing is a scenic red-brick walkway that winds along the shore. It’s a great place to relax after focusing on the war. Here, you’ll find restaurants with fresh seafood dishes and river views, galleries with paintings and pottery by local artists, and shops that include a goldsmith and a quaint second-hand bookstore. You are especially lucky if you enjoy a variety of art such as ceramics, glass, and wood carvings. These can be found in several galleries.

Look for the oversized “LOVE” letters that are on display between Water Street Grille and the Freight Shed. This new facility is ideal for photo ops and is part of Virginia’s LOVEworks project which can be found throughout the Commonwealth.

Your sweet tooth will be happy here. Grab ice cream at Ben and Jerry’s or opt for a slice of homemade cake at The Carrot Tree. And if you’re here for lunch or dinner, head to the popular Yorktown Pub for oysters or the famous grilled crab cakes. Also ask about the beer of the day.

Yorktown is part of the American Historic Triangle, which also includes Colonial Williamsburg and the Jamestown Colony. These three amazing historic sites are all within a few miles of each other. Ticket packages are available. What a pleasure to plan a trip including all three!

A day in Yorktown gives you the perfect blend of past and present. Explore how the American Revolution unfolded and why Yorktown was central to American victory. Drive through verdant battlefields with views of the York River. Relax in the charming riverside town. You will have so much to think about and remember from your time in Yorktown.

For more things to do in Virginia, check out our recent coverage on these destinations:

How to apply for a credit card without credit