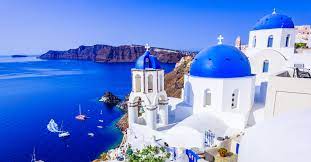 The statement was officially presented at a press conference at the GNTO booth hosted by Dimitrios Fragakis, the GNTO General Secretary. It comes as the national tourism body attempts to showcase Greek tourism across the region ahead of summers with a focus on its exceptional weather conditions and varied experiences on offer throughout 2022.

As part of its ongoing commitment, the GNTO is partnering with Qatar Airways to announce new direct routes to Greece, providing seamless connectivity for passengers eager to enjoy one-stop connections.

Become the third destination in Greece to be served by Qatar Airways,
Santorini, the popular Greek destination, will join popular flight services to Athens and Mykonos.

Qatar Airways and the GNTO will run a media campaign that would raise awareness in Qatar, the United Arab Emirates and Saudi Arabia, with a focus on experiences that only Greece can offer any traveler. Additionally, the campaign will target potential Australian travellers. From Hamad International Airport in Doha, the first flight to Santorini is due to take off. Hamad International Airport was voted the best airport in the world in 2021.

Additionally, the new flight services will increase the impressive connectivity that Greece already has with the EMEA (Europe, Middle East and Africa) region.