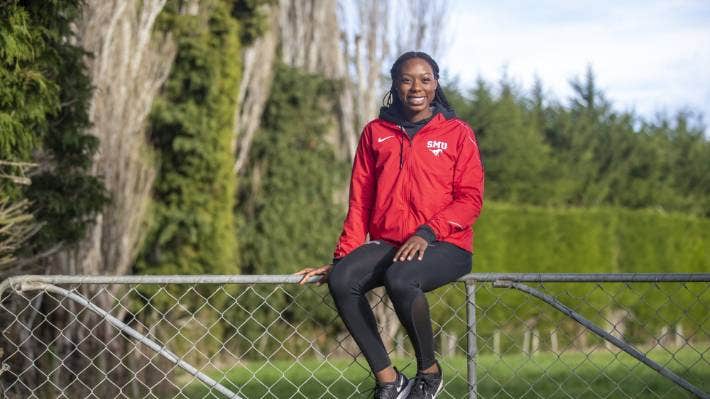 From Zimbabwe to New Zealand to Texas: Atipa is Living the American College Dream

Atipa Mabonga’s parents signed her up for almost every available sport when she was a child.

It wasn’t so much the sport itself, there were other reasons.

Almost 20 years ago, the Mabonga family left Zimbabwe for New Zealand for a new life.

Atipa was four years old at the time.

First stop was Opunake, Taranaki, then Riversdale, Southland before finally finding their home across the province in Otautau.

Mabonga was around eight years old when she joined athletics at Southland.

She was part of the small Otautau Athletics Club in western Southland.

“Mom and dad signed us up because the best way to learn about a new culture is through sports and food.

“Sport was a great way to meet people.”

At this point, athletics was more about seeing New Zealand than the world.

“It was a great way to travel. My brother and I have been to every Colgate Games, literally from the age of five until about 12 years old.

“I never had any pressure from my parents to play. It was really out of love.”

But sometimes in the joy of sport emerges an obvious talent.

During Mabonga’s time at Central Southland College, she established herself as one of the most talented young high jumpers in the country. She excelled, especially in the triple jump.

During this evolution as a promising athlete, Mabonga trained alongside another Southland triple jump star, Greer Alsop, under the tutelage of Lance Smith.

Alsop ended up moving to the United States in 2014 on a college scholarship. She attended Washington State University.

Before that, runner Christina Taylor headed to the University of Denton in Texas.

This sparked a lot of intrigue for Mabonga.

“I thought, ‘Oh my God, what is this? It’s like a whole other world,’ she recalls the idea of ​​living, studying and competing in the States -United.

In Year 12 at Central Southland College, the thinking started to get serious for Mabonga. Offers started coming in from colleges.

Mabonga says she would be lying if she said she wasn’t nervous when she put pen to paper and committed to living in Dallas, Texas in 2017.

“I remember mom saying, you can give it a year and if you hate it, you can go home.”

“My mum and dad had taken the plunge to move from Zimbabwe to New Zealand, so I thought, ‘if they can do it, and establish a successful life here, I can do it’.”

Five years later, the 23-year-old describes the opportunity as life changing. She is living the American dream and has never looked back.

She established herself as a popular member of the [SMU] athletics team.

In 2018, she was named SMU’s field team MVP and won an academic award while on the team.

In 2020, Mabonga won the Jerry LeVias Outstanding Athlete Award, designed to honor an African-American student-athlete who exemplifies excellence on and off the court.

But his impact during his four years at SMU extended beyond that. She took every available opportunity and became a leader. There is proof.

In 2020, she co-founded the Black Student Athlete Committee [BSAC] at EMS.

She says a lot of it is about making sure people of color are heard and providing support where needed.

Although he finished at SMU in 2021, Mabonga remains a director of BSAC. She is proud of the work accomplished.

Mabonga is now employed by the Kansas City Chiefs NFL organization in a sought-after role.

She joined the organization last year in a seasonal position as a social media assistant for the NFL Giant.

However, the Chiefs have decided to offer a full-time position as an influencer and culture coordinator.

It’s a big role, but in short, she works to help build the player and team brand, not just in the United States but around the world.

“It’s an honor to be entrusted with such a large part of the Chiefs brand at such a young age and so early in my career.”

For now, she’s chosen to put her own athletic quests on hold, opting instead to give her body a break.

Mabonga traveled to the United States with sports at the center of her attention, but took much more advantage of the scholarship opportunity.

Mabonga will always be grateful to where sport has taken her in life.

“It was definitely one of the most impactful things I’ve ever done. I would do it again,” she says of the American college experience.

“It’s a lot of work and it’s not easy. It’s a full-time commitment, mind, body and soul.

“But for me, I’ve grown so much as an athlete, but also as a person. I’m just eternally grateful to the coaches who recruited me.

“SMU will always be special to me because that’s where I think I blossomed into who I am today.”

How to Get the Best Truck Repair Loans