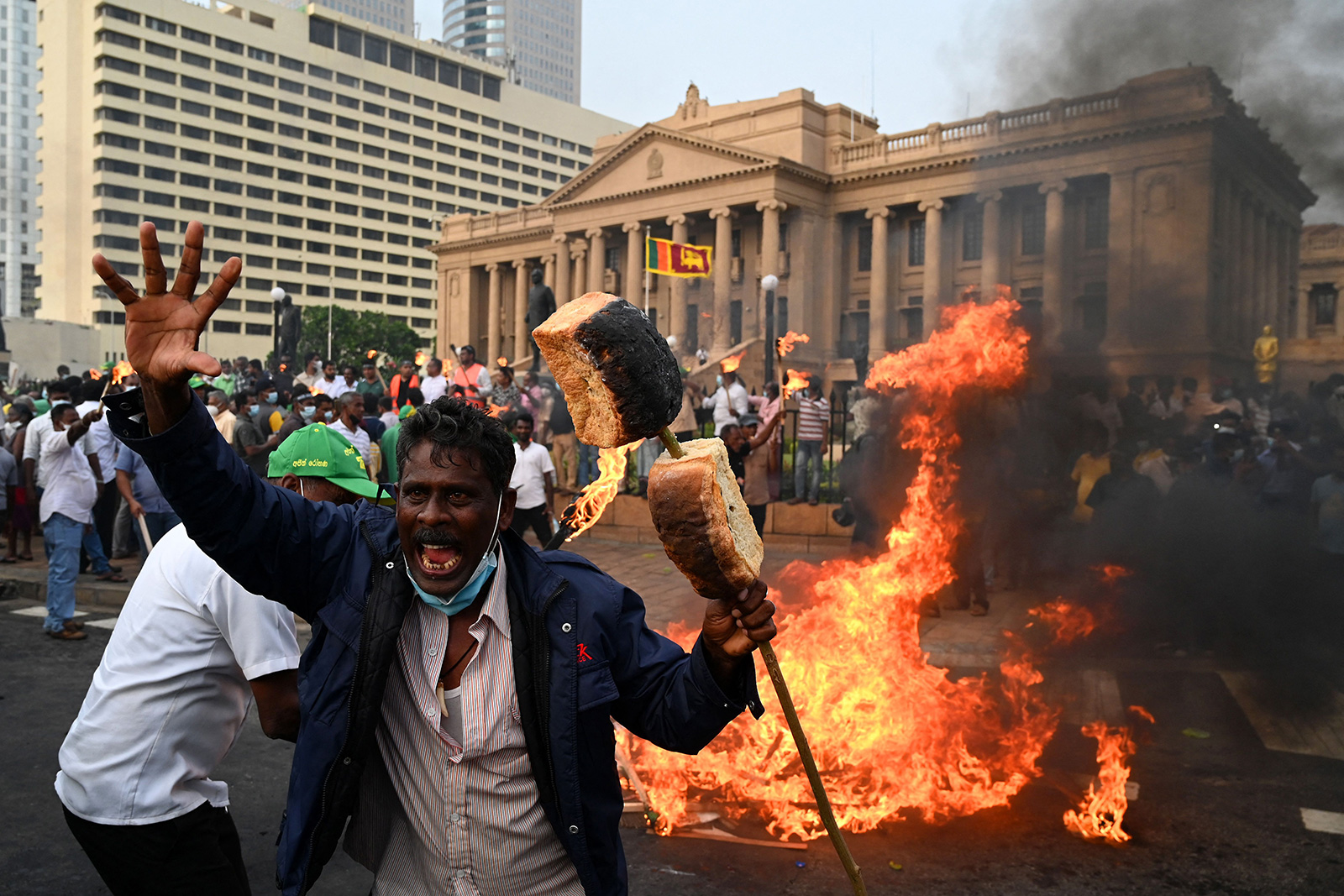 From Pakistan to Peru, soaring food and fuel prices are pushing countries to the brink

(CNN) — When people took to the streets in Egypt in 2011, protesters chanted freedom and social justice, but also bread. The cost of staple foods had jumped due to soaring prices of commodities like wheat, stoking the fury of President Hosni Mubarak.

Today, more than a decade after the Arab Spring, world food prices are soaring again. They had already reached their highest level on record earlier this year as the pandemic, bad weather and climate crisis upended agriculture and threatened the food security of millions of people. Then came Russia’s war in Ukraine, which made the situation worse – while also triggering a spike in the cost of the other essential daily fuel.

The combination could generate a wave of political instability as people who were already frustrated with government leaders are pushed over the edge by rising costs.

Unrest in Sri Lanka, Pakistan and Peru over the past week highlights the risks. In Sri Lanka, protests have erupted over shortages of gas and other commodities. Double-digit inflation in Pakistan eroded support for Prime Minister Imran Khan, forcing him out of office. At least six people have died in recent anti-government protests in Peru sparked by rising fuel prices. But political conflicts should not be limited to these countries.

Lessons from the Arab Spring

As the anti-government protests known as the Arab Spring approached – which began in Tunisia in late 2010 and spread to the Middle East and North Africa in 2011 – food prices rose sharply. The United Nations Food and Agriculture Organization’s food price index reached 106.7 in 2010 and jumped to 131.9 in 2011, then a record high.

“Mohamed Bouazizi didn’t set himself on fire because he couldn’t blog or vote,” an Emirati commentator wrote in January 2011, referring to the street vendor whose act of protest helped spark the revolution in Tunisia and ultimately in the Arab world. “People set themselves on fire because they can’t stand to see their families slowly wasting away, not from grief, but from cold hunger.”

Circumstances in different countries differed, but the big picture was clear. Soaring wheat prices were a big part of the problem.

The situation is now even worse than it was then. World food prices have just reached a new high. The FAO Food Price Index released on Friday hit 159.3 in March, up nearly 13% from February. The war in Ukraine, a major exporter of wheat, corn and vegetable oils, as well as tough sanctions against Russia — a major wheat and fertilizer producer — are expected to spur further price increases in the months ahead. .

“Forty percent of Ukraine’s wheat and maize exports go to the Middle East and Africa, which are already struggling with hunger issues, and where further food shortages or price hikes could stir up social unrest,” said Gilbert Houngbo, director of the International Fund for Agriculture. Development, said last month.

Adding to the pain is soaring energy prices. World oil prices are almost 60% higher than a year ago. The cost of coal and natural gas has also increased.

Many governments are struggling to protect their citizens, but the fragile economies that borrowed heavily to weather the 2008 financial crisis and the pandemic are the most vulnerable. As growth slows, hurting their currencies and making debt repayment more difficult, sustaining food and fuel subsidies will be difficult, especially if prices continue to rise.

“We are now in a situation where countries are in debt,” Arezki said. “As a result, they have no buffers to try to contain the tensions that will emerge from such high prices.”

According to the World Bank, nearly 60% of the poorest countries were “already in debt distress or at high risk of being so” on the eve of the invasion of Ukraine.

Asia: In Sri Lanka, an island nation of 22 million, an economic and political crisis is already boiling over, with protesters taking to the streets in defiance of curfews and government ministers resigning en masse.

Struggling with high debt levels and a weak economy dependent on tourism, Sri Lanka has been forced to deplete its foreign currency reserves. This has prevented the government from making payments for key imports such as energy, creating devastating shortages and forcing people to spend hours queuing for fuel.

Its leaders have also devalued its currency, the Sri Lankan rupee, as they seek a bailout from the International Monetary Fund. But that only made inflation worse at home. In January, it reached 14%, nearly double the rate of price increases in the United States.

Pakistan’s parliament on Sunday issued a vote of no confidence in Khan, ousting him from power and toppling his government. While his political troubles stretch back for years, allegations of economic mismanagement as the cost of food and fuel soared, as well as depleted foreign exchange reserves, have made matters worse.

“The scale of the economic chaos has united the opposition to Imran Khan,” said Verisk Maplecroft’s Kinnear.

Middle East and Africa: Experts are also watching for signs of political distress in other Middle Eastern countries that rely heavily on food imports from the Black Sea region and often provide generous subsidies to the public.

In Lebanon, where nearly three-quarters of the population lived in poverty last year following a political and economic collapse, between 70 and 80 percent of imported wheat comes from Russia and Ukraine. Key grain silos were also destroyed in the 2020 explosion at the port of Beirut.

And Egypt, the world’s biggest buyer of wheat, is already under enormous pressure from its massive bread subsidy program. The country recently set a fixed price for unsubsidized bread after the price spike and is instead trying to secure wheat imports from countries like India and Argentina.

With around 70% of the world’s poor living in Africa, the continent will also be “highly exposed” to rising food and energy prices, Arezki said.

Droughts and conflict in countries including Ethiopia, Somalia, South Sudan and Burkina Faso have created a food security crisis for more than a quarter of the continent’s population, the International Committee said this week. of the Red Cross. The situation is likely to worsen in the coming months, he continues.

Political instability has already taken hold in parts of the continent. A series of coups have taken place in West and Central Africa since the start of 2021.

Europe: Even countries with more developed economies, which have larger buffers to protect citizens from painful price increases, will not have the tools to fully cushion the blow.

Thousands of protesters gathered in cities across Greece this week to demand higher wages to counter inflation, as the French presidential election tightens as far-right candidate Marine Le Pen puts forward her plans to reduce the cost of living. President Emmanuel Macron’s government said last month it was considering issuing food stamps so middle- and low-income families can afford to eat.