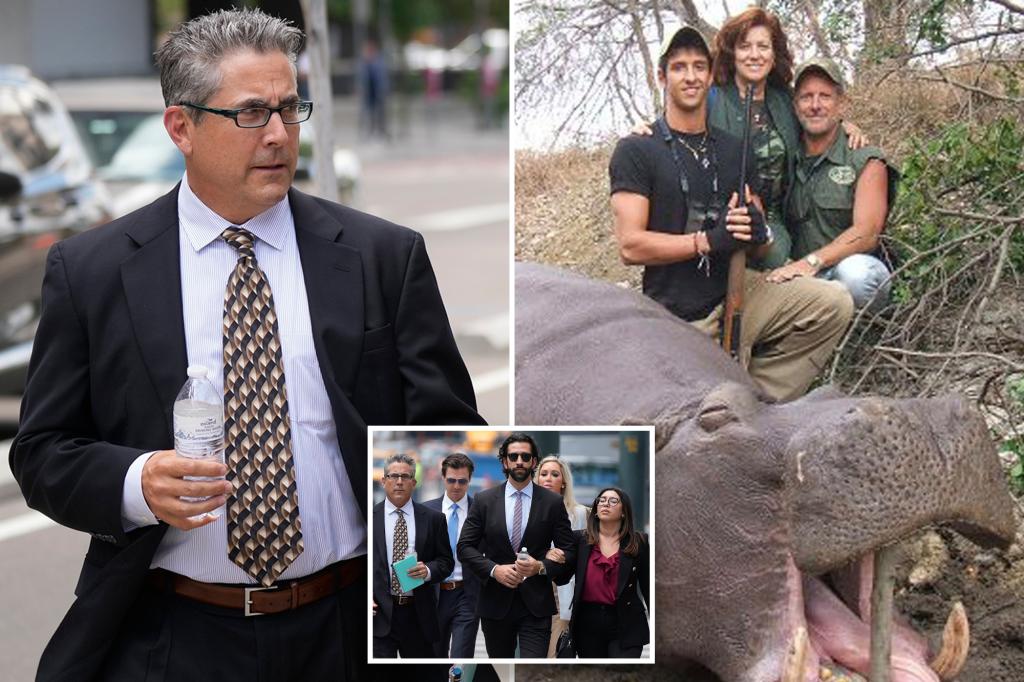 A multimillionaire Pennsylvania dentist accused of murdering his wife on an African safari testified at his trial on Wednesday that a shotgun they brought with them was accidentally discharged while his wife was packing her bags at haste.

In their opening statements, the prosecution said Rudolph was heard blurting out “I killed my fucking wife for you!” during an argument with the other woman, Lori Milliron, in 2020.

Rudolph, whose voice sometimes cracked during his testimony, which lasted more than two hours, told the court about his open marriage to Bianca and his death in October 2016 in Zambia.

The dentist claimed he was in the bathroom of their cabin when he heard the shot and came out to find his wife bleeding on the floor from a gunshot wound to her chest.

He said his wife packed her things quickly because she was in a hurry to get home.

Rudolph is charged with murder and mail fraud in what prosecutors describe as a premeditated crime.

He faces a maximum sentence of life in prison or the death penalty if convicted of murder at the trial, which is being held in federal court because the insurance companies who paid him nearly $5 million for the death of his wife were based in Colorado.

Rudolph’s girlfriend, Milliron, is also on trial, accused of lying to a grand jury and being an accessory after the fact.

In his testimony, Rudolph denied confessing to murdering his wife while having dinner with Milliron at a steakhouse in Phoenix in 2020.

He said he and Milliron were arguing about their finances and the effect of the COVID-19 pandemic on his successful practice, Three Rivers Dental in Pittsburgh, but his main concern at the time was an FBI investigation. on the death of his wife.

Rudolph said what he said to his girlfriend on that occasion was, “Now they say I killed my fucking wife for you.”

The FBI opened the investigation into Bianca’s death after being tipped off by a ‘friend’ in South Africa, who said he suspected ‘foul play’ due to Rudolph’s alleged history of marital infidelity and his wife. decision to have his wife’s body cremated, despite herself. to be a devout Catholic.

He also did not tell his two children and other family members about Bianca’s death and subsequent funeral for a week, according to court documents.

Rudolph was arrested by the FBI in Mexico and extradited to the United States in December 2021 to face federal charges.

On the witness stand on Wednesday, Rudolph sought to undermine the prosecution’s theory that he killed his wife to be with his mistress. After nearly getting divorced twice, Rudolph said, he and Bianca agreed to stay married in 2000 but pursue sexual relationships with other people.

He said the tension in their marriage eased after that, describing himself as “reasonably happy” in their arrangement. Rudolph said neither Milliron nor his wife gave him an ultimatum to end his relationship with the other.

Rudolph’s attorney, David Markus, argued that Rudolph had no financial motive for the murder. Rudolph was worth over $15 million when his wife died and the insurance payout went into a trust for their children.

Zambian authorities determined the October 11, 2016 shooting was accidental just two days after Bianca was killed, the defense says. The investigators of the insurers who then paid 4.8 million dollars came to the same conclusion.

Prosecutors countered that evidence showed Bianca’s injuries were from a shot fired from 2 to 3.5 feet away, suggesting she had not accidentally shot herself in the chest.

The “why” behind CAPTRUST’s first acquisition in 2022