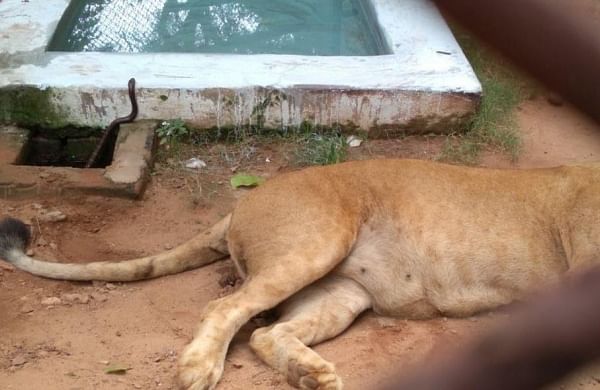 BHUBANESWAR: A 15-year-old African lioness was killed after being bitten by a Common Krait, a highly venomous snake, at Nandankanan Zoo here on Saturday.

Lioness Ganga was brought from Israel in 2015.

The zoo’s deputy director, Sanjeet Kumar, said an animal keeper noticed Ganga was sick around 8:30 a.m. and informed vets. A team went to the scene and found muscle paralysis and other snakebite symptoms in the lioness.

As the team began the treatment process, a common krait was found near the water tank inside the compound.

In view of the symptoms, three vials of anti-venom were administered to the lioness. However, Ganga did not respond to the treatment and succumbed to the bite.

Kumar said the lioness is believed to have been bitten by the snake long before the anti-venom treatment began for which she could not be saved.

“The exact cause of death, however, will be known after the post-mortem report is received,” he said.

The zoo’s deputy director also clarified that the zoo has adequate anti-venom stock for the treatment of inmates and zoo staff in case of emergency.

“Although the zoo could not store anti-venom in large quantities, it maintained sufficient stock needed for emergency use,” he said.

Four lions had been brought to Nandankanan from Israel in 2015 to increase their population during the zoo’s lion safari. However, two of them had already died in August 2018.

Kumar said they were in talks with Nehru Zoological Park, Hyderabad to bring a male African lion to Nandankanan this year.