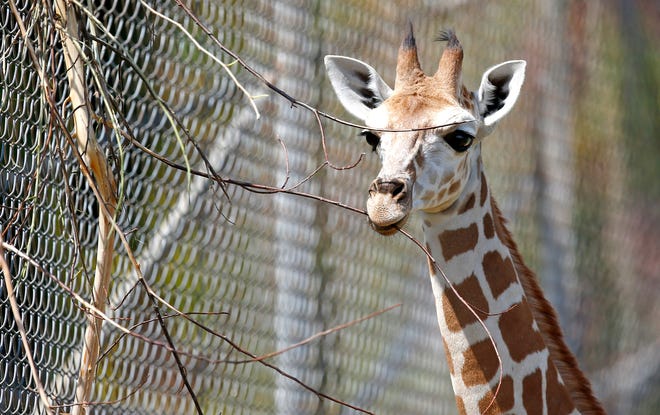 As the weather begins to cool, now is a great time to explore the OKC Zoo. There are new animals, habitats and events that are sure to entertain all ages this fall.

The zoo hosted not one, but two giraffe calves this summer. The youngest was born to Julu, 6, at 8:21 a.m. on September 15. The still unnamed calf could be on display to the public as early as next week.

Kioni was born to Ellie, 21, on June 3. Kioni is Ellie’s sixth calf and is one of the most independent calves Hoof curator Tracey Dolphin has never seen.

This fall will see the opening of a whole new habitat, Predator Pass, which will house the zoo’s pack of endangered African painted dogs as well as cheetahs that will be welcomed to the zoo once the habitat is complete.

There will be several observation alcoves for the habitat, which is located on the west side of the zoo. Predator Pass is expected to open in early November.

If you visit the zoo in the next two years, it will be impossible to miss the ongoing construction of Africa Expedition, the zoo’s largest habitat expansion to date.

The expansion will include a new giraffe barn with indoor views of the giraffe herd year-round, as well as a terrace overlooking the savannah where guests can feed the giraffes. The savannah habitat will also be home to zebras, wildebeest, okapi, meerkats, and honey badgers.

There will also be a rainforest habitat and a new home for the zoo’s flamingos.

4. Haunt the zoo for Halloween

From 9 a.m. to 4 p.m. every Saturday and Sunday in October, families are invited to bring their kids to treats for the 38th Annual Haunt the Zoo for Halloween. The candy will be distributed by volunteers through 8-foot “treat tubes” in Haunt the Zoo treat bags, which must be purchased in addition to zoo admission.

Guests will find themed photo booths throughout the zoo, a hay maze at no additional cost, and a pumpkin painting for $ 6. All ticket options can be viewed at okczoo.org/tickets.

For ages 21 and over, Haunt the Zoo: All Grown Up will take place from 7 p.m. to 11 p.m. on October 29. Guests will find full bars, food and entertainment. Tickets cost $ 40 for non-members.

Watch the animals at the OKC Zoo go wild for pumpkins from 10 a.m. to 2 p.m. on October 15. This annual fall enrichment event stimulates animal senses and encourages natural behaviors like foraging.

The zoo 13th Annual Beer Tasting Event will entertain craft beer enthusiasts from 7 p.m. to 10 p.m. on October 1. Over 60 local and national breweries will be in attendance, along with wine, specialty cocktails and non-alcoholic drinks for designated drivers.

Throughout the year, the zoo celebrates its vast array of animals with World and International Days dedicated to specific species, often those that are threatened with extinction in the wild.

Coming soon, International Red Panda Day, September 18, and World Gorilla Day, September 24. Both are sponsored by Bob Moore Subaru and feature activities with prizes, photo opportunities, and the chance to learn what you can do to help cash. Conservation efforts.

If you haven’t heard it yet, some prehistoric species took over the zoo’s pollinator garden in May. To verify DINO SAFARI, a set of 15 life-size animatronic dinosaurs before their last day at the zoo on October 31.

Admission to DINO SAFARI must be purchased for $ 6 per person, in addition to general admission to the zoo.

9. Ways to get free entry to the zoo

Are you now looking forward to exploring all that the OKC Zoo has to offer this fall? Want to know how to get free entry? There are currently a few options.

Between October 1 and October 7, guests bringing a larger-than-head pumpkin will receive free admission on the same day. Donated pumpkins will be used to decorate Haunt the Zoo.

A purchase of The September issue of Curbside Chronicle is accompanied by a good General Admission Zoo. The magazine can be purchased for a suggested donation of $ 2 from street vendors throughout the metro area until September 31.

The Oklahoma Zoo and American Red Cross are partnership for a blood drive September 26 from 10 a.m. to 4 p.m. Donors will receive a voucher for general admission to the zoo.

Library card holders statewide can check out the new children’s book “Juniper’s Butterfly Garden,” which teaches children about monarch butterflies, and receive a voucher for free general admission to the zoo for up to four people. Find more information at https://www.okczoo.org/readforadventure.